When the Clock Strikes

When the Clock Strikes from Refreshing Hope Ministries on Vimeo.

(I planned to wrap up my series on "Intentional Growth" this week, but while praying, the Lord interrupted me and changed my message. Lord willing, we will continue the series next week.) 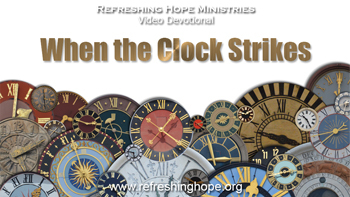 The message that came to me while praying was, "When the Clock Strikes." I began to feel despair, and I recognize it for I've been there. He impressed on me that many of us are waiting on a change to come, a breakthrough, but the hope is fading. Sometimes it can seem like it is taking forever like nothing is happening. You feel stalled, and all the while, your prayers seem to go unanswered.

The Lord wants YOU to know that it is closer now than ever before. I feel the Lord wants to give you hope, encouragement, to tell you that it is even right at the door. Now is not the time to give up, for things are about to get better. His plans can be twenty-years in the making but then executed overnight. Let's start with Joseph.

Joseph: God gave Joseph two dreams when he was a young boy of about seventeen years, showing that he would be a ruler (Genesis 37:2). When he told his brothers about his dreams, they became very jealous of him. When Joseph was alone with them in the field, they seized him and sold him as a slave to some traveling merchants. Yet, that only escalated his dream and caused it to come to pass.

Joseph went through a lot after that. He was taken to Egypt and sold as a slave to the Captain of the Guard. Then he was a servant in Potiphar's house until the man's wife accused Joseph of trying to rape her. Because of that incident, Joseph went to prison for a few years for something he did not do. His dreams had all but faded. Things looked bad for Joseph.

Yet, when God's clock ticked one more time, Joseph was summoned before Pharaoh and promoted to the second-in-command of all Egypt. His brothers came and bowed down before him just as he had seen in the dream thirteen years before. Joseph was now thirty years old. God's plan proved true and faithful, no matter what the circumstances looked like. Joseph's dream had come true. It just took a while. When God gave Joseph the dream, Joseph thought it would be immediate, but God had scheduled it on His calendar for later.

Abraham: God told Abraham that he would be the father of nations when he was seventy-five years old, according to Genesis 12:4. After about ten years, Abraham and Sarah tried to make sense of what God had told them. They still had no children. You can't be a "Father of Nations" without any kids, so they decided to remedy that. Sarah gave Abraham her servant Hagar as a wife that he might have children by her. Well, that didn't work out so great, but it still did not change God's plan for them.

After about thirteen more years, God renewed the promise again when Abraham was ninety-nine. He made it clear that the son would come through his wife, Sarah, who was now ninety years old, and he would be named Isaac (Genesis 17:19). Isaac was born just as God said when Abraham was one hundred years old (Genesis 21:5). So Abraham waited twenty-five years for the promise of God to come to pass, but it did. Just as God had told him. There were wars and times of confusion. His wife Sarah had been taken away from Abraham twice. There was strife with family members and conflicts. Yet, none of it stopped the plan of God from coming to pass when God's clock ticked.

Moses: Moses was about forty years old and living in Egypt. He was raised as the son of the Pharaoh's daughter. One day, "it came into his heart" to visit the children of Israel (Acts 7:23). Moses saw their plight and tried to help his people using his own strength, but it went badly. Moses killed an Egyptian and was then exiled from Egypt. He ended up tending sheep in the land of Midian for the next forty years (Acts 7:29).

When Moses was eighty years old, God appeared to him in a burning bush and sent him back to deliver his people (Exodus 7:7). By then, Moses had long given up on that dream. Moses told the Lord to send someone else, but He would not take no for an answer. So Moses went and fulfilled the calling of God on his life. It had been in the heart of Moses for forty years, but only now had it became a reality. Yet, it did come to pass, only much later than Moses thought.

David: David was probably between ten to fifteen years old when God had Samuel anoint him as King over Israel (1 Samuel 16:13). It does not give an exact age, but David was so young that he was not even considered a contender when they lined up his seven brothers (1 Samuel 16:9). Yet, David did not actually become King until he was thirty.

When David was anointed with oil among his brothers, the Spirit of the Lord rushed upon him. From that day forth, David began to grow into his destiny. Difficult obstacles appeared, and divine doors opened. David killed lions, bears, giants (1 Samuel 17:36), and tens of thousands of Philistines (1 Samuel 18:7). He played music for King Saul, and he became the King's armor-bearer (1 Samuel 16:21). David loved, and he lost (1 Samuel 18:19).

Then at thirty years of age, David actually became the King of Israel. There was a gap of about fifteen to twenty years between the promise of God and the fulfillment. God used this time to refine David, train him, and establish him in the people's eyes. He thoroughly tested David's character. You could have randomly chosen a single day from David's life, and it would have looked pretty mundane. We get to read the book of highlights, which is more exciting. Yet, when God's clock ticked, the word to David was fulfilled.

Jesus: Jesus was thirty years old when He began His ministry. This was the age that a man was regarded as fully mature and when the Levite priests began their service at the temple (Numbers 4:47). There were so many prophecies about the life and ministry of Jesus from long before. Even Jesus had to go through a time of maturing before He began His ministry.

The Bible is full of examples of people that were promised something but then endured and matured before they actually lived it. In my own life, the Lord told me to prepare myself for ministry when I was around twenty years old. So I went through Bible college and then ended up working on computers and networks for about twenty years. When I was 45 years old and had long given up on ministry and felt like I knew absolutely nothing, He pushed me into full-time ministry. The time had come, and here I am, using the skills that I learned along the way.

Don't give up hope while you are waiting on God. Don't take today for granted. It's not an accident, and you are fortunate to have it. The Lord is always preparing us. We are constantly learning, growing, and maturing in our walk with Jesus. When you stumble, be quick to get up and take another step. Be encouraged because you are not the first to wait on a promise to come to pass. Yet, you can rest assured that the clock is ticking, and you are closer now than ever before.

Prayer: Heavenly Father, please strengthen my hands to do the work You have given me today. You know what is best, and the world operates on Your clock, Your times, and Your seasons. I understand that things are lining up, and each moment brings me closer. In the name of Jesus Christ, I pray. Amen!