When God Shakes the Earth

When God Shakes the Earth from Refreshing Hope Ministries on Vimeo.

Today I want to talk about the rise and fall of kingdoms on the Earth. They come and they go, but there is one that will remain for eternity. The prophet Daniel wrote about a vision that he had during the night in Daniel 7:13:

(Daniel 7:13–14 NASB)  “I kept looking in the night visions, And behold, with the clouds of heaven One like a Son of Man was coming, And He came up to the Ancient of Days And was presented before Him. “And to Him was given dominion, Glory and a kingdom, That all the peoples, nations and men of every language Might serve Him. His dominion is an everlasting dominion Which will not pass away; And His kingdom is one Which will not be destroyed. 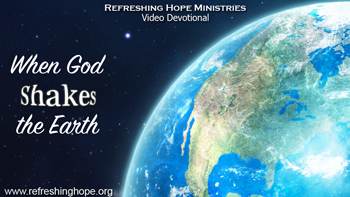 This is speaking of the kingdom of God, as well as the coming of the Lord Jesus Christ. When a disciple asked Jesus to teach them to pray, He told them this:

(Luke 11:1–4 NKJV)  Now it came to pass, as He was praying in a certain place, when He ceased, that one of His disciples said to Him, “Lord, teach us to pray, as John also taught his disciples.” So He said to them, “When you pray, say: Our Father in heaven, Hallowed be Your name. Your kingdom come. Your will be done On earth as it is in heaven. Give us day by day our daily bread. And forgive us our sins, For we also forgive everyone who is indebted to us. And do not lead us into temptation, But deliver us from the evil one.”

As I understand it, God’s will is perfectly done in heaven, but here on the Earth there is opposition and spiritual beings that directly oppose and hinder it. As Christians, we are to pray for His kingdom to come, and His will to be done on the Earth. That is spiritual warfare in a nutshell. Our real enemy is the spiritual forces behind the scenes who are using people as puppets. God has a kingdom, satan has a kingdom (Luke 11:18). God has His people, and so does satan (John 8:44).

As nice as praying for world peace sounds, that is not what Jesus told us to pray for. We are to pray that His kingdom comes and the Lord’s will is done, whatever that may bring with it. That is the way Jesus prayed in the garden: (Luke 22:42 NASB) …“Father, if You are willing, remove this cup from Me; yet not My will, but Yours be done.”

Jesus knew that what was soon coming would be extremely painful. He knew that He was going to be crucified and killed. Yet He continued to pray that will of God would be done. That is our model. In the days ahead of us, all the kingdoms of the Earth will be shaken, but the kingdom of God is unshakable. The writer of Hebrews put it this way:

(Hebrews 12:25–29 NASB)  See to it that you do not refuse Him who is speaking. For if those did not escape when they refused him who warned them on earth, much less will we escape who turn away from Him who warns from heaven. And His voice shook the earth then, but now He has promised, saying, “YET ONCE MORE I WILL SHAKE NOT ONLY THE EARTH, BUT ALSO THE HEAVEN.” This expression, “Yet once more,” denotes the removing of those things which can be shaken, as of created things, so that those things which cannot be shaken may remain. Therefore, since we receive a kingdom which cannot be shaken, let us show gratitude, by which we may offer to God an acceptable service with reverence and awe; for our God is a consuming fire.

This refers back to when God spoke from Mount Sinai. The people who heard His voice soon forgot and they all died in the desert. They were not allowed to enter the Promised Land. We are not to be like them. When God shakes the Earth, we should show gratitude, reverence, and awe. We are to trust Him to make the right decisions, for He does know what is best in the long run though it may seem unpleasant at the time.

Our mind should be focused on His kingdom, and we should ally ourselves with Him and what He is doing today. If we are so wrapped up in worldly things, then when it is shaken, we will be shaken along with it. Those who live in the kingdom of God will never be shaken. The kingdom of God is like the wind and though it cannot be seen with the natural eyes, its effects can be felt. Kingdom basically means “King’s Domain”; it is God living within us. Jesus said it like this:

Like the earthly kingdoms, all the treasures of the Earth will come to an end and cease to exist, but those who have invested in the kingdom of God will have treasure in heaven that will never see decay (Matthew 6:20). On top of that, gold is considered to be a rare treasure on the Earth, but God uses it to pave the streets of heaven. So even if you could take all your gold with you, it would have no more value than a chunk of asphalt.

The kingdoms of the world will be shaken. They will come and they will go, but the kingdom of God will exist forever, and those who are a part of it will not be shaken. We are not to live in fear, but in awe, for great things are coming.

(Haggai 2:5–7 NASB)  ‘As for the promise which I made you when you came out of Egypt, My Spirit is abiding in your midst; do not fear!’ “For thus says the LORD of hosts, ‘Once more in a little while, I am going to shake the heavens and the earth, the sea also and the dry land. ‘I will shake all the nations; and they will come with the wealth of all nations, and I will fill this house with glory,’ says the LORD of hosts.

Prayer: Heavenly Father, please help me get in tune with You. May Your kingdom come and Your will be done on Earth, and in my life, as it is in heaven. I pray that You help me be steadfast and to clearly recognize when You are speaking to me, in the name of Jesus Christ I pray. Amen.