Walking on Water from Refreshing Hope Ministries on Vimeo.

Now in the fourth watch of the night Jesus went to them, walking on the sea. And when the disciples saw Him walking on the sea, they were troubled, saying, “It is a ghost!” And they cried out for fear. But immediately Jesus spoke to them, saying, “Be of good cheer! It is I; do not be afraid.” And Peter answered Him and said, “Lord, if it is You, command me to come to You on the water.” So He said, “Come.” And when Peter had come down out of the boat, he walked on the water to go to Jesus. But when he saw that the wind was boisterous, he was afraid; and beginning to sink he cried out, saying, “Lord, save me!” And immediately Jesus stretched out His hand and caught him, and said to him, “O you of little faith, why did you doubt?” Matthew 14:25–31 NKJV 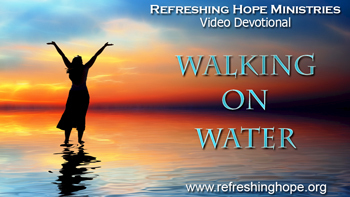 Most of us know that Jesus walked on the water, but many do not know that Peter did as well. Peter simply asked Jesus, who said “Come”, then Peter got out of the boat and began walking on the water with Jesus. If Peter would have asked those disciples in the boat with him if he could walk on water, they would thought that he was an idiot. If he would have asked a college professor, they would said “Impossible!” But here Peter asked Jesus, who was already out there doing it.

The impossible is only impossible until someone begins doing it. One important note on this story is that you cannot get your destiny, your calling, what you should be focusing on, from a man. It has to come directly from God. You ask Him what you need to focus on. You ask Him to open the right doors for you, to put you where you need to be. You ask Him for wisdom, guidance, for advice. James said it this way:

“If any of you lacks wisdom, let him ask of God, who gives to all liberally and without reproach, and it will be given to him. But let him ask in faith, with no doubting, for he who doubts is like a wave of the sea driven and tossed by the wind.” (James 1:5–6 NKJV).

Faith, believing God without doubting, is important. That is what made the water become solid under the feet of Jesus and Peter: faith. When the winds began to blow and the waves got higher, Peter began to doubt and then he began to sink. He panicked, he screamed “Lord Save Me!” When they got back in the boat, Jesus asked Peter one question: “Why did you doubt?”

Faith is not speaking words. It is demonstrated by your actions and what you do is already showing what you believe. Peter believed Jesus enough to step out on the water, and it then became solid enough to support him.

When the Spirit prompted us to start Refreshing Hope, I pulled an old server out of the closet and began to format it. Immediately after I started, the means to actually do it started coming. His provision came after we took action, but not before. We could have prayed until we passed out, but He was waiting on us to take the first step that He had told us. Peter could have stared at that water like the rest of the disciples in that boat did, but it was only when he took the first step that the water became solid.

There were so many times when the Lord began pushing me into our computer business, that I would get service calls that were far over my head and no one to turn to but Him. There was no Internet available, or smart phones, or a search engine to turn to. There was only a blinking command prompt and fervent prayer for wisdom. I would pray and often hear “Go and I’ll go with you.” Each time that I would go, He would give me the answer to the problem. It was all preparing me for what we do today, but my point is that as long as I took action on my faith, He gave me the grace to succeed.

Once an insurance company called me with a dozen computers networked together, and one had lost connection with the network. I had never actually seen a computer network before, much less worked on them. I didn’t want to go, fear of failure, whatever. I prayed and heard “Go and I’ll go with you.” I prayed all the way there. When I got there, I met the owner and as we stood beside a filing cabinet, and he explained to me what was wrong. There was a box with flashing lights on top of the filling cabinet, and when I absently minded put my hand on it, another light came on. I removed my hand and the little light went off. On closer inspection, one of the wires had come loose and it happened to be the cable for the broken computer.

What a coincidence that I walked straight into the building to that box and fixed their computer network within a few minutes without ever having seen one before. William Temple said it best with “When I pray, coincidences happen, and when I don't, they don’t.”

There is no need to ask those around you what you should be doing. Ask Jesus directly like Peter did. I have been told to quit almost everything that He told me to do with the usual “Let the professionals do it.” It was that way with computers, with music, with singing, with writing. Hogwash! If the Lord brings you to it, He is more than able to bring you through it. Just as when Joseph shared his dreams with his brothers and they hated him even more (Genesis 37:8), sometimes the worst thing that you can do is to share your dream with those around you. They arn’t getting out of that boat and they will not want you to either! But don’t let them stop you.

Prayer: Heavenly Father, I want more of You in my life. Please open my ears to hear You clearly and my mind to understand Your word properly. My God is not dead and You said that Your sheep hear Your voice, so here I am waiting on Your orders. I am Yours, Lord. Give me a clear direction, in the name of Jesus Christ I pray. Amen.