Sacrifice. If the Lord asked you to give up, surrender, give away, something precious to you. Would you be willing? In the book of Genesis, Abraham had waited many long years for him and Sarah to have a child. God had made them a promise and even told them that his name would be Isaac (Genesis 17:19). Isaac means "he laughed" because they grew so old that the dream seemed impossible. The next time God brought the subject up, Sarah began laughing at Him (Genesis 18:12).

Abraham and Sarah waited and waited for their promised child to be born. Finally, when Abraham was one-hundred, and Sarah was ninety years old, she conceived, and they had a son. They named him Isaac. He was a joy to them,  a wonderful son who brought them laughter in their old age. The family lived happily together, and Isaac grew to be a teenager of about sixteen years. Then God suddenly asked the unthinkable: 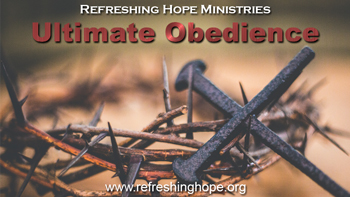 (Genesis 22:1–3 NASB)  Now it came about after these things, that God tested Abraham, and said to him, "Abraham!" And he said, "Here I am." He said, "Take now your son, your only son, whom you love, Isaac, and go to the land of Moriah, and offer him there as a burnt offering on one of the mountains of which I will tell you." So Abraham rose early in the morning and saddled his donkey…

Would God ask him to give up his precious son he had waited for decades to have, his only heir? Apparently so. It is hard to even imagine what Abraham must have felt. Scripture tells us that it was a test, but He didn't tell Abraham that. He didn't tell Abraham why, and Abraham didn't have the examples in the Bible to read like we have, for He was a pioneer in the faith. Child sacrifice was practiced by the pagan religions around him. To Abraham, this request was as real as it gets.

Abraham rose early in the morning, took Isaac, some wood, and set off for mount Moriah, where Solomon's temple would later be built. Abraham believed that God's word to him would come to pass somehow, someway. He believed that even if Isaac died, God would resurrect him from the dead. Abraham believed in the resurrection before there was a resurrection. He was a man of incredible faith. They made the long journey. Abraham bound his son Isaac with ropes, laid him on a makeshift altar of wood, and picked up a knife to kill him. As Abraham began his swing, an angel of the Lord stopped him. Then the Lord told him this:

(Genesis 22:15–18 NASB)  Then the angel of the LORD called to Abraham a second time from heaven, and said, “By Myself I have sworn, declares the LORD, because you have done this thing and have not withheld your son, your only son, indeed I will greatly bless you, and I will greatly multiply your seed as the stars of the heavens and as the sand which is on the seashore; and your seed shall possess the gate of their enemies. “In your seed all the nations of the earth shall be blessed, because you have obeyed My voice.”

When Abraham heeded the Lord's voice and surrendered Isaac, the Lord gave him back, but then came so much more. He intensely blessed Abraham and his descendants so that all the nations on Earth would be touched by him. All because Abraham had not withheld something precious that the Lord asked him to give up.

We read this, and it is a courageous story of faith. Way to go, Abraham! But how does it affect us? What I want you to know is that the Heavenly Father we pray to is the same God that asked Abraham to make that sacrifice for Him, and He sacrificed His own Son for us. He will test your faith, your obedience, and ask you to give up things you would rather keep without telling you why.

Faith is like a muscle. It only grows only when exercised. Abraham had his faith stretched to the utter limit, yet he held firm, and his faith became the prime example listed in the book of Hebrews. Growing in faith involves testing it, stretching it. The Lord wants to know if we have real faith or merely words.

When I was around twenty years old, through personal prophecy, the Lord told me that I would be in the ministry one day. I already knew this in my heart, so this was just a confirmation. I took it seriously and did all that I could to prepare for ministry. I went through Bible College and got ordained. I prayed, fasted, and listened to the Bible 24/7. But years later, when I graduated, all the doors in ministry seemed closed. I ended up working on computers for the next twenty years and started my own repair business.

Eventually, our computer business dried totally up. We spent six months with no work, having to charge our bills on credit cards. Finally, the week that we were sorting things to move out of our home, I went into my room to pray, and I had a vision of me climbing into a boxing ring and putting on the gloves. That Friday, I was pushed into full-time ministry as a pastor using the computer skills that I had learned along the way.

The new job as a pastor seemed made just for me. I had a wonderful boss, a generous salary, great hours, a peaceful work environment. It was the best job I'd ever had. I was able to be in God's Word every day, and I began writing daily devotionals, which we sent out using a mail server farm I built for us. I knew without a shadow of a doubt that the Lord had put me there. It had been twenty years in the making, but now things were finally coming together.

A year passed. I began to have vivid dreams I didn't understand. In one, the boss ran our car off the road and plowed through a line of seven crosses while laughing hysterically. The dreams came like nightmares over several weeks, each more intense than the last. Each dream was built on the previous one in the series. Our car, which was a beaten-up jalopy by then, was finally destroyed in a fiery crash during the seventh dream. But when the people around saw what had happened, they gathered together and began building me another one. The replacement car resembled a 67' Corvette fastback. It was only primer gray then, but you could tell it would be fast and beautiful when completed.

The dreams were disturbing but made no sense to me at the time. I prayed about them a lot but heard nothing until the seventh dream came. The following morning during prayer, He said, "I want you to step down." Well, you could have slapped me. It was the best job that I'd ever had, I knew He had put me there, and the only one that seemed to have a problem with it was Him! I had no other job to go to, but the feeling would not leave, and it kept me up at night.

We pray for His will to be done on Earth as it is in heaven. Well, what do you have to do when He reveals His will to you but you don’t like it? You obey it anyway. So I went to the boss and gave my notice that I would be leaving, and things suddenly got real nasty. People like you stepping up, but they don't like you stepping down. Here I was at forty-five with no job to go to but leaving a great one. I looked like a prize idiot, but I knew it was what He wanted. And once you know, you really have no choice if you're going to move forward.

Things began looking bad for us financially. Sylvia and I prayed about it and decided that we would do whatever it took, even if that meant getting a job cutting grass for a while. We started updating our resumes. While we were praying together for direction, the words "Refreshing Hope" came to us. One thing led to another, and here we are. Refreshing Hope Ministries is now reaching the disabled and those who have no church, using the skills we learned along the way.

The Lord asked me to give up something I really loved, a great job as a pastor, without even a hint of another job to go to. It was blind faith. All He would tell me was, "Step down.” But when we did, things quickly began to fall into place for us, and Refreshing Hope was born. He has led the right people here, and it is a beautiful community of believers from around the world. But Refreshing Hope would have never existed if we had not first been willing to let go of what the Lord was asking for. When we did, He replaced what we had with something better.

I would not even begin to compare our faith struggle with Abraham's, but just know that He will go after things you hold dear without telling you why. Your faith will be tested, and your actions, not your words, will provide His answer. If you feel Him tugging on something, let it go. He will replace it with something better.

Prayer: Heavenly Father, please guide me into all that You have for me. Show me what I should be focusing on in my life today and give me a clear direction. May Your will be done on Earth and in my life as it is in heaven, in the name of Jesus Christ, I pray. Amen!