Today I want to talk about the three crosses that were placed on the hill of Calvary the day that Jesus Christ was crucified. We will pick this up in Matthew chapter 27: 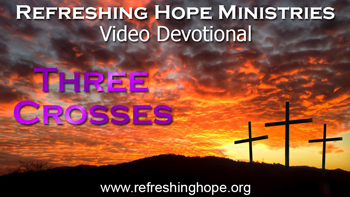 And when they had crucified Him, they divided up His garments among themselves by casting lots. And sitting down, they began to keep watch over Him there. And above His head they put up the charge against Him which read, “THIS IS JESUS THE KING OF THE JEWS.” At that time two robbers were crucified with Him, one on the right and one on the left. Matthew 27:35–38 NASB

There was a robber, a thief, crucified on either side of Jesus with Him in the middle. Jesus told us in John 10:10: “The thief comes only to steal and kill and destroy; I came that they may have life, and have it abundantly.” John 10:10 NASB

The enemy will always try and get you off balance; he will try and get you to give up, or to burn yourself out, to never meet Jesus, or to be a fanatic and join a cult, to nit pick over the slightest detail, or never stand for anything. The truth is in between the extremes. Moderation is key to a healthy life. Oscar Wilde’s said it best with “Everything in moderation, including moderation.”

For example, there is a way of thinking in much of the church that the flock should live in poverty, but scripture tells us that poverty is a curse (Deuteronomy 28:15).

I have heard some preachers tell me that I should give it all, then noticed that they were wearing a suit that I couldn’t afford, and driving a vehicle that was ten years newer than mine. Something tells me that they held a little back for themselves.

The other side of the coin is to give nothing at all, which will keep you from experiencing the blessings of God in your life. This is not a message on giving, but it would be wrong to move on without making this point clear.

Malachi wrote: “Will a man rob God? Yet you are robbing Me! But you say, ‘How have we robbed You?’ In tithes and offerings. “You are cursed with a curse, for you are robbing Me, the whole nation of you! “Bring the whole tithe into the storehouse, so that there may be food in My house, and test Me now in this,” says the LORD of hosts, “if I will not open for you the windows of heaven and pour out for you a blessing until it overflows. “Then I will rebuke the devourer for you, so that it will not destroy the fruits of the ground; Malachi 3:8-11 NASB.

Jesus said: “Give, and it will be given to you. They will pour into your lap a good measure—pressed down, shaken together, and running over. For by your standard of measure it will be measured to you in return.” Luke 6:38 NASB. Notice that what you give determines what you will receive. They are directly linked, and the opposite would be written as: “Do not give, and it will not be given to you.”

Paul wrote: “Each one must do just as he has purposed in his heart, not grudgingly or under compulsion, for God loves a cheerful giver.” 2 Corinthians 9:7 NASB

Tithe means “tenth.” God asked that we give a tenth of what comes into our house toward His work and promises in return that He will bless the 90% we are allowed to keep.

You cannot separate your wallet from serving God. The love of money can become an idol in your life, giving some of it away kills this idol at the root. The sooner that you become a cheerful giver, the better that your life will be. The balance is in between of giving nothing, and giving everything.

Monkery in misery is not the Christian life that scripture teaches. The Lord wants us to live a joyful, happy life while we are here on earth, but to remember Him and involve Him in it. Isn’t that what we want for our own children?

David wrote: “Delight yourself in the LORD; And He will give you the desires of your heart.” Psalm 37:4 NASB.

Nehemiah wrote: “Do not be grieved, for the joy of the LORD is your strength.” Nehemiah 8:10 NASB.

In the opposite sense, Moses wrote: “Because you did not serve the LORD your God with joy and a glad heart, for the abundance of all things; therefore you shall serve your enemies whom the LORD will send against you, in hunger, in thirst, in nakedness, and in the lack of all things;” Deuteronomy 28:47–48 NASB.

Poverty, misery, lack were all part of the curse that Jesus delivered us from. Those are not things that we should aspire to. If you have nothing, how can you help those in need?

Work is a great thing, in moderation. Again the enemy will try and get you to either work yourself to death, or to not work at all. The balance is in between the extremes. Once when we were working excessively, working all day at work, and then on other projects in the evening and weekends, which were all good things, I went into my room here to pray.

While I was praying, I had a vision of Sylvia and I standing on the ocean, with the wind blowing through her beautiful hair. Then I remembered that her birthday was coming up soon, and something said “Maybe you should take her on a mini vacation.”

I brushed that off as the devil because we had so much to do. I felt that we were far too busy to take time off. Later that day, I checked my email and there was a coupon from an oceanfront resort that we had once stayed at, offering a deal for $49 a night. A romantic weekend getaway for $98. I gave in, and we went off and had a wonderful time together. The Lord wants you to have a happy, successful marriage, and He will interrupt your plans. If you will follow His gentle promptings, He will make your life better.

Can you be too zealous for God? Unless you are balanced by the wisdom of the Holy Spirit, absolutely. We know well-meaning Christians who are technophobes, who believe computers are evil, the beast, and to be avoided at all costs.

One I know laughs every time they see the guy in the movie “Fireproof” beat his computer with a baseball bat, apparently because they think that is pleasing to God. Though there have been many times that I wanted to beat a computer with a baseball bat myself, God chose to put us in ministry using them. They are simply a tool, and at Refreshing Hope, we reach the lost and hurting through the use of computers and over the internet. We are here for such a time as this. #AgeOfTheGeek.

God wants to be a part of your happy life, but while doing so, don’t let your religious “zeal” become stupidity. Take it one day at a time, enjoy your life that is passing by very quickly, and involve Jesus in it.

Prayer: Heavenly Father, please guide me and help me live a balanced life. Surround me with the right people and help me to focus on the right things. May Your perfect will be done in my life, in the name of Jesus Christ I pray. Amen.