The Wonder of You

The Wonder of You from Refreshing Hope Ministries on Vimeo.

Today I want to talk about the wonder of the Lord. I believe that wonder is a great definition of what it feels like to have the Holy Spirit moving in your life. It can feel almost magical, surreal, at times you may ask yourself “Is this really happening?”

Wonder (noun) 1 a feeling of surprise and admiration, caused by something beautiful, unexpected, or unfamiliar. (Concise Oxford English Dictionary).

Some people feel that God is distant, that He is unconcerned about our trivial lives, but I can tell you that nothing is further from the truth. We have had Him work in the tiniest of details. Consider the promise of Psalm 37:4:

Delight yourself in the LORD; And He will give you the desires of your heart. Commit your way to the LORD, Trust also in Him, and He will do it. (Psalm 37:4–5 NASB). 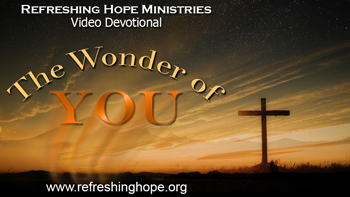 That is a promise. You put Him first, and the things you desire, the desires of your heart, will begin to find their way to you. As far as tiny things go, consider this. I once wanted an HDMI to DVI converter cable to hook a computer to a television. This was many years ago and HDMI was just starting to spread. I was shopping online one morning and found the cable on the Internet, but it was about $45. I didn’t want it that bad, so we went to work. We worked on computers for a living and our first client of the day was an insurance company. As the manager explained the problems they were having to us, he suddenly stopped, reached in his desk drawer and pulled out an HDMI to DVI converter cable still in the plastic. He tossed it on the desk and said “I bought this a while back. I don’t even know what it is for. Maybe you can use it.” I had not told anyone that I wanted a cable, and I had not prayed about it. Coincidence, or a desire of my heart finding its way to me. You decide. All I know is that I felt wonder.

Some feel that God is too big, too busy, too important, and they are too small for Him to notice. But Matthew 10:30 tells us that “the very hairs of your head are all numbered” (Matthew 10:30 NASB). What He has done for others, He will do for you as well. Consider this verse:

Is anyone among you sick? Then he must call for the elders of the church and they are to pray over him, anointing him with oil in the name of the Lord; and the prayer offered in faith will restore the one who is sick, and the Lord will raise him up, and if he has committed sins, they will be forgiven him. (James 5:14–15 NASB).

We can be tempted to read this and move on, but once my wife, Sylvia, became very sick with a sudden and unexplained chronic cough. The doctor tried several things, but nothing seemed to help. She would start coughing, and choking, and it continued until she would vomit. She couldn’t ride in a car without throwing up. We became pretty much homebound except for frequent trips to the pharmacy. The coughing was so violent that she pulled all the muscles around her abdomen and it hurt her so bad it would bring tears. We prayed and prayed but saw no change. We often stayed up all night long, and barely got any sleep. This continued for over a month.

A visiting speaker came to our church that we liked to hear, Dennis DeGrasse from North Carolina. We felt like we should go so we did, and Sylvia coughed through the entire service. When the meeting was over, we went up front for prayer and Dennis laid his hands on Sylvia and began to pray for her. The coughing got violently worse, she doubled over and began choking. Then suddenly it left, her color returned to normal, and she was instantly healed. She coughed no more. It was so quiet and peaceful that night that it felt surreal. I felt wonder.

The Lord is “wonder full”, literally full of wonder. I can share testimony after testimony of Him coming through for us when it seemed like there was no hope at all. Those were the times when everything in the natural looked bad, but things in the Spirit were moving into place. Suddenly, “wham!”, it would all come together into a “pinch yourself” moment to see if it was real or a dream.

In 2012, when we had been out of work for several months and were packing to move out of our home, I sat down in this room and suddenly had a vision. Within 48 hours I was a Pastor, and a good friend of ours stepped in and paid all our bills for the month. The Lord completely changed our life, and I felt wonder, “Can this be true?”

Later when we felt the Holy Spirit prompting us to start an online church, we sat down and calculated what we would need to get started using an Excel spreadsheet. We figured if we used an old server that we had left over from our computer business, took no salary, bought this and that, we could get it online with $2500. At the time, we were the only tithers at RHM and that was more than we had. We prayed and felt that it was what we should do, so we decided to start and just go as far as we could. I pulled the old server out of the closet and started formatting it. Within 30 minutes, someone came to our little website and donated exactly $2500. We had not told anyone what we were planning. It was another pinch yourself moment. I felt wonder at His goodness.

God has always taken care of His people, and He will take care of you. I did not share these testimonies to build ourselves up, but to build you up, to show you how wonderful He can be. What He has done for us, He will do for you. He is continuing to work in the lives of His people just as He has from the beginning.

Wonder is all through the Bible. It is a “wonder full” book. If you will love Him, He will love you back. Yes, I know that God loves the world, but who gets the desires of their heart? The ones who delight in the Lord. Seek the kingdom of God and His righteousness, and all these things will be added to you. He can fill you with wonder.

Prayer: Heavenly Father, please give me a fresh vision and help me get in tune with You. I want to be a part of what You are doing. Teach me what I need to know in order to follow You closer. Let me see Your wonder in my life, in the name of Jesus Christ I pray. Amen.