The Wet Fleece from Refreshing Hope Ministries on Vimeo.

Today I want to talk about Gideon in Judges, chapter six. For seven years, raiders from the land of Midian would invade Israel at harvest time, set up camps, then systematically steal their crops, livestock, and destroy and pillage anything of value. They came up like locusts and their numbers could not even be counted. The Israelites were humiliated and had to hide in caves.

One day Gideon was threshing wheat inside of a winepress in order to hide it from the raiders, when an Angel of the Lord appeared, which is probably an Old Testament appearance of Jesus Christ. During their conversation it tells us “the Lord turned to him”(Judges 6:14) and “the Lord said to him”(16) and “I will be with you.” He told Gideon to go in the strength he had and save Israel from the hand of the Midianites.

Gideon asked for a sign that it was the Lord and brought out some food for Him. The Angel touched it with the tip of His staff, fire came up from the rock and consumed the food, and the Angel vanished. Then something interesting happens; let’s read it: (Judges 6:20) 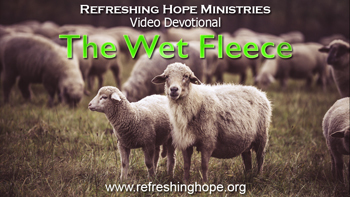 Did you catch that? The Angel vanished, yet the Lord mysteriously continues to speak to him. Gideon was now hearing the Lord speak. When the Lord first spoke to Gideon, his next thought was probably: “You are making that up.” Then later that night, the Lord spoke to him again and told him to tear down his father’s altar to baal and build one to the Lord on that spot. So Gideon tore down the altar to baal and worked that night on building a new one to the Lord. The following morning the entire town was hunting for the person who did it. When they found out that it was Gideon, they wanted to kill him, but his father, who owned the property and was an important man in the village, intervened.

The Lord had told Gideon to go in the strength he had and save Israel from the Midianites, but Gideon was afraid. Even the people of his own town wanted to kill him. He wanted to know for certain that it was the Lord speaking to him, so he asked for a sign: (Judges 6:36)

So Gideon said to God, “If You will save Israel by my hand as You have said—look, I shall put a fleece of wool on the threshing floor; if there is dew on the fleece only, and it is dry on all the ground, then I shall know that You will save Israel by my hand, as You have said.” And it was so. When he rose early the next morning and squeezed the fleece together, he wrung the dew out of the fleece, a bowlful of water. Then Gideon said to God, “Do not be angry with me, but let me speak just once more: Let me test, I pray, just once more with the fleece; let it now be dry only on the fleece, but on all the ground let there be dew.” And God did so that night. It was dry on the fleece only, but there was dew on all the ground. Judges 6:36–40 NKJV

So Gideon placed a fleece on the ground and asked the Lord to let the fleece be wet and the ground dry when he woke up. It was. Then Gideon asked for the fleece to be dry and the ground wet the following morning. It was. Even though the first fleece test was successful, Gideon wanted a second test to confirm that one.

When you hear from the Lord, it is normal for the next thought to be like Gideon’s: one of doubt. Jesus told us that when the word is sown, the enemy comes immediately to snatch it away (Matthew 13:19). Gideon asked the Lord for a confirmation, and then he used a fleece as a test. Jesus said, “My sheep hear My voice” (John 10:27) and that His sheep know Him and would not follow a stranger (John 10:5). You will learn to tell the difference.

In my own life, these fleece-type confirmations worked when I truly needed direction and really did not know if it was the Lord speaking to me. Then after I came to know Him better, they gradually worked less and less and it required more faith, more trust. The Lord knows what you know. He can see our hearts. When I am completely stalled, He may give me a sign to encourage me to take the next step, but it is more rare these days. After you have walked with Him a while, it becomes “signs following” and not “signs leading.”

For example, when we felt the Lord telling us to start an Internet Church here at Refreshing Hope, we calculated that it would cost us about $2500 to get started if we used some old equipment that we had around. Back then Sylvia and I were about the only supporters of RHM and that was more than we had, but we felt like it was what He wanted us to do. So I pulled an old server out of the closet and began formatting it on our kitchen table. Within thirty minutes someone came to our website and donated $2500. We had not told a soul about our plans or needs. It was signs following obedience, not obedience following a sign.

We help a child learn to walk, but after they learn how, they walk on their own. As we build a relationship with God and take on the mind of Christ, we begin to recognize when it is the Lord speaking. The Lord wants us to learn to trust Him and not be paralyzed waiting on a sign from heaven.

Do not be surprised if you pray and the Lord speaks to you in some way. When He does, you may immediately think “You are making that up!" We have all been there, but somewhere deep inside you, you will know that it is Him. Learn to trust God. If you miss Him, He will find you. His Spirit lives inside of us and hearing the Lord speak to you is easier than you think.

Prayer: Heavenly Father, I thank You so much for all that You have done for me. I pray that You teach me to hear Your voice better, to recognize when it is You speaking, to protect me from deception. I want a deeper, more meaningful relationship with You today. Draw me close to You Lord, in the name of Jesus Christ I pray. Amen!

Note: It's almost 2020! For those who would like to include us in your year-end giving, here is the link to donate to RHM. Refreshing Hope Ministries is a registered 501(c)(3) non-profit organization, and contributions are tax-deductible. We deeply appreciate all who have supported us throughout the year - y'all are a critical part in making this ministry possible - thank you! As always, no pressure - we are in His hands and are grateful for all who are here to read the devotional and participate in the online church!