The Promised Land from Refreshing Hope Ministries on Vimeo.

In the book of Joshua, the Israelites were gathered together on the bank of the Jordan River. For the last forty years, God had miraculously provided for their every need, and He had done everything for them. He went before them as a cloud by day and a pillar of fire by night (Exodus 13:21). The Lord parted the Red Sea so they could cross safely (Exodus 14:21). He fed them manna from heaven for forty years and gave them water from rocks. Even their clothing did not wear out (Nehemiah 9:21). God had done everything for them until then, but from now on, they were going to be working together. 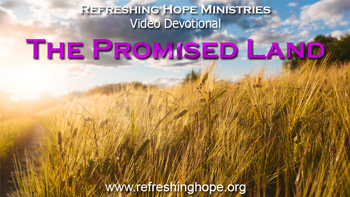 (Joshua 1:1–3 NKJV)  After the death of Moses the servant of the LORD, it came to pass that the LORD spoke to Joshua the son of Nun, Moses' assistant, saying: "Moses My servant is dead. Now therefore, arise, go over this Jordan, you and all this people, to the land which I am giving to them—the children of Israel. Every place that the sole of your foot will tread upon I have given you, as I said to Moses.

In order to take the Promised Land, the Israelites were going to have to fight for it city by city. God told Joshua, "Every place that you set your foot, I will give you" (Joshua 1:3), but Joshua died before they took it all (Judges 1:1). Every place they did not set their foot was not given to them.

The Israelites were to work with God and conquer the existing inhabitants of the land. The ones they did not drive out became thorns in their sides and a snare to them (Judges 1:32, 2:3). What they allowed to stay in the land, God also allowed.

Israel crossed the Jordon river (Joshua 3:17), and we can see this as a form of baptism. Then they were circumcised at Gigal (Joshua 5:2), renewing their covenant relationship with God. To us, it is circumcision of the heart (Romans 2:29). However, it is still a covenant relationship, an agreement or contract between us.

The first city they went up against in the Promised Land was Jericho. All the gold and silver taken from Jericho was supposed to be brought into the Lord's treasury (Joshua 5:19). We can see this as a form of tithing. Giving God the first part of our income is the first city you come to in your Christian walk. God will test you to see who you love the most: Him, or your money. An Israelite named Achan just couldn't do it, and he kept some of the loot for himself. So Israel lost the next battle at Ai, for God was no longer with them (Joshua 7:1). They could not take the next city until they had dealt with the first one properly.

Today, God takes care of the things we cannot. For example, He redeemed us after the fall of Adam and Eve because we could not. Think of that as crossing the Jordan river into the Promised Land. Now you are saved, and your feet are in the Promised Land, but it is not entirely yours until you work with God to take the rest of it by force. You have to remove the existing inhabitants.

Jesus said: (Mark 7:14–23 NASB)  After He called the crowd to Him again, He began saying to them, "Listen to Me, all of you, and understand: there is nothing outside the man which can defile him if it goes into him; but the things which proceed out of the man are what defile the man. "If anyone has ears to hear, let him hear." When he had left the crowd and entered the house, His disciples questioned Him about the parable.

And He said to them, "Are you so lacking in understanding also? Do you not understand that whatever goes into the man from outside cannot defile him, because it does not go into his heart, but into his stomach, and is eliminated?" (Thus He declared all foods clean.) And He was saying, "That which proceeds out of the man, that is what defiles the man. "For from within, out of the heart of men, proceed the evil thoughts, fornications, thefts, murders, adulteries, deeds of coveting and wickedness, as well as deceit, sensuality, envy, slander, pride and foolishness. "All these evil things proceed from within and defile the man."

What you allow to remain inside of you, God allows as well. Our hate, anger, bitterness, greed, lust, jealousy, strife, and addictions will stay as long as we "tolerate" them. God will not separate us from our friends. When we get serious and decide to get rid of them, then God will help us. It is a battle we must fight together. God helps us, but we learn to resist those urges the instant they begin.

(James 4:7 NKJV)  Therefore submit to God. Resist the devil and he will flee from you.

God worked with the Israelites as they took their Promised Land. He rained hailstones down on some of their enemies (Joshua 10:11) and sent hornets after others (Joshua 24:12). He will work with us as well to take back our land.

The enemies we face, like addictions, will do anything to stay just as theirs did. The Gibeonites lied to the Israelite leaders and got them to sign a treaty of peace. The Israelites did not inquire of God but followed their own judgment (Joshua 9:14). Your enemies will lie to you and tell you that it is harmless, in order to stay. But you can't hold hands with the destroyer and expect good things to come from it.

Sin always starts with a thought. Martin Luther King Jr. said, "You can't stop birds from flying over your head, but you can keep them from building a nest in your hair." What you feed in your mind will grow, and what you starve will die. So don't let your mind lust after things you are trying to overcome.

Everyone who gets serious with God knows when He puts His finger on something in their life that needs to change. So work with God to stomp out the bad and bring forth a harvest of good in your life. Retake these strongholds one at a time as God brings you to them, just like the cities in the Promised Land. Take control of your own body, your mind, and your mouth.

Prayer: Heavenly Father, I pray that You give me the grace to change for the better. Don't let me stay the same! Please break me out of the shell that I have formed, deliver me, and set me free from the things that bind me. Help me see what needs to change clearly. In the name of Jesus Christ, I pray. Amen!