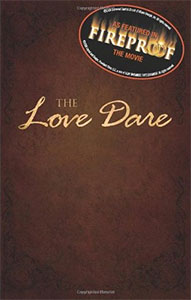 This one is tough – perhaps the toughest dare in the book.  But if there is to be any hope for your marriage, this is a challenge that must absolutely be taken seriously.  Counselors and ministers who deal with broken couples on a regular basis will tell you that this is the most complex problem of all, a rupture that is often the last to be repaired.  It cannot just be considered and contemplated but must be deliberately put into practice.  Forgiveness has to happen, or a successful marriage won’t.

Jesus painted a vivid image of forgiveness in His parable of the ungrateful servant.  A man who owed a sizable sum of money was surprised when his master heard his appeals for mercy and totally canceled his debt.  But upon being released from this enormous load, the servant did a most unexpected thing; he went to another man who owed him a much smaller amount and demanded immediate payment.  When the master heard of it, things changed dramatically in his arrangement with the slave. “His lord, moved with anger, handed him over to the torturers until he should repay all that was owed him” (Matthew 18:34).  A day that had begun with joy and relief ended in grief and hopelessness.

Torture. Prison. When you think of unforgiveness, this is what should come to your mind, for Jesus said, “My heavenly Father will also do the same to you, if each of does not forgive his brother from your heart” (Matthew 18:35).

Imagine you find yourself in a prison-like setting.  As you look around, you see a number of cells visible from where you’re standing.  You see people from your past incarcerated there – people who wounded you as a child.  You see people you once called friends but who wronged you at some point in life.  You might see one or both of your parents there, perhaps a brother or sister or some other family member.  Even your spouse is locked in nearby, trapped with all the others in this jail of your own making.

This prison, you see, is a room in your own heart.  This dark, drafty, depressing chamber exists inside you every day.  But not far away, Jesus is standing there, extending to you a key that will release every inmate.

No. You don’t want any part of it.  These people have hurt you too badly.  They knew what they were doing and yet they did it anyway – even your spouse, the one you should have been able to count on most of all.  So you resist and turn away.  You’re unwilling to stay here any longer – seeing Jesus, seeing the key in His hand, knowing what He’s asking you to do.  It’s just too much.

But in trying to escape, you make a startling discovery.  There is no way out.  You’re trapped inside with all other captives.  Your unforgiveness, anger, and bitterness have made a prisoner of you as well.  Like the servant in Jesus’ story, who was forgiven an impossible debt, you have chosen not to forgive and have been handed over to the jailers and torturers.  Your freedom is now dependent on your forgiveness.

Coming to this conclusion usually takes us a while. We see all kinds of dangers and risks involved in forgiving others.  For instance, what they did was really wrong, whether they admit it or  not.  They may not even be sorry about it.  They may feel perfectly justified in their actions, even going so far as to blame you for it.  But forgiveness doesn’t absolve anyone of blame.  It doesn’t clear their record with God.  It just clears you of having to worry about how to punish them.  When you forgive another person, you’re not turning them loose.  You’re just turning them over to God, who can be counted on to deal with them His way. You’re saving yourself the trouble of scripting any more arguments or trying to prevail in this situation.  It’s not about winning and losing anymore. It’s about freedom.  It’s about letting go.

That’s why you often hear people who have genuinely forgiven say, “It felt like a weight being lifted off my shoulders.”  Yes, that’s exactly what it is.  It’s like a breath of fresh air rushing into your hear.  The stale dankness of the prison house is flooded with light and coolness.  For the first time in a long time, you feel at peace.  You feel free.

But how do you do it?  You release your anger and the responsibility for judging this person to the Lord.  “Never take your own revenge, beloved, but leave room for the wrath for it is written, ‘Vengeance is Mine, I will repay,’ says the Lord” (Romans 12:19).

How do you know you’ve done it?  You know it when the thought of their name or the sight of their face – rather than causing your blood to boil – causes you to feel sorry for them instead, to pity them, to genuinely hope they get this turned around.

There’s so much more that could be said and so many emotional issues you may need to fight through to get there.  But great marriages are not created by people who never hurt each other, only by people who choose to keep “no record of wrongs” (1 Corinthians 13:5).

Whatever you haven’t forgiven in your mate, forgive it today.  Let it go.  Just as we ask Jesus to “forgive us our debts” each day, we must ask Him to help us “forgive our debtors” each day as well. Unforgiveness has been keeping you and your spouse in prison too long.  Say from your heart, “I choose to forgive.”

Click here to buy a copy of the Love Dare book.

Material taken from The Love Dare by Stephen and Alex Kendrick, copyright © 2009 by B&H Publishing Group. Used by permission.  Unauthorized reproduction in any format is strictly prohibited by law.

Scroll down to comment below. We would love to hear from you!