The Blood of the Lamb

The Blood of the Lamb from Refreshing Hope Ministries on Vimeo.

This is resurrection Sunday, the day that we remember the resurrection of Jesus Christ. There are so many topics that could be discussed, but today I want to talk about something that Jesus gave us, His own blood, and why that is so important.

Derek Prince once said that the most powerful faith declaration for deliverance is this: “I am redeemed by the blood of the Lamb out of the hand of the enemy!”

Jesus is our Passover Lamb. satan hates Passover because Passover is the celebration of Jesus. Emperor Constantine during the 4th century tried to unite the divided Roman empire by combining Christianity and paganism in order to appeal to the masses. They abolished the passover, but invented other combined celebrations of Jesus. That is how we got Christmas and Easter, which are just a blend of pagan holidays and Christianity.

The church simply found an acceptable mix that could appeal to everyone - but the original event was Passover. So if easter is based on a pagan holiday, why are we here today? We are here because 1) It fell on a Sunday and 2) We are remembering the death, resurrection, the passover of the Lord Jesus Christ. We will do our best to worship the Lord Jesus Christ and put a smile on His face today. That is all that I have to say about that.

In Exodus chapter 12, the Israelites were held as slaves in Egypt. Moses, working directly under God’s command had called for nine plagues on Egypt so far, which were: The Nile river turned to blood, frogs, gnats and lice, flies, diseased livestock, boils, hail, locusts, and a thick darkness that could be felt, for three days. Now things got really serious, God would completely break the power of darkness that was holding His people. The death of all the firstborn in Egypt.

God gave Moses instructions on how the Israelites were to protect themselves from the coming plague, and it was by the passover lamb. Each family was to take a lamb without blemish or spot, kill it, and apply its blood to the door posts of their house. Then the angel of death would “pass over” that house and not harm the people living there. Up until then, the plagues had directly targeted the Egyptians and spared the Israelites, but now it was based on participation. The blood on the door posts was what caused the family inside to be protected. As far as I can tell, it would have worked for the Egyptians if they would have applied it to their houses, and the Israelites would have died if they had not. It reads: “When I see the blood, I will pass over you.” It was no longer who you were born as, it depended on you faithfully applying the blood to your house.

If we compare the passover with the New Testament, we can see that Jesus became our passover lamb. A perfect lamb without spot, wrinkle or blemish, killed during the feast of passover at Jerusalem. 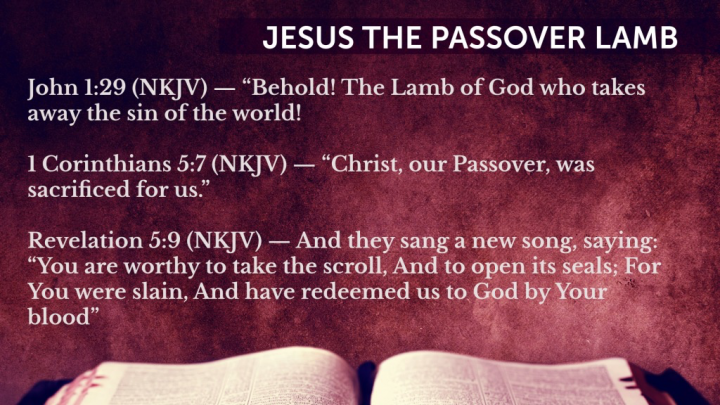 - When John the baptizer saw Jesus coming towards him, he said in: John 1:29 (NKJV) — “Behold! The Lamb of God who takes away the sin of the world!
- Paul wrote in: 1 Corinthians 5:7 (NKJV) — “Christ, our Passover, was sacrificed for us.”
- John wrote in Revelation: Revelation 5:9 (NKJV) — And they sang a new song, saying: “You are worthy to take the scroll, And to open its seals; For You were slain, And have redeemed us to God by Your blood”

Celebrating Passover is celebrating Jesus. As the Passover Lamb, He shed His blood to redeem us from the enemy. When His blood is “on the doorpost” of your life, God delivers you from the destroyer. Everything in Passover is a picture of Jesus, and every element points to Jesus. God went to great lengths to connect the crucifixion of Jesus with the Passover feast, while the church in general has tried to separate it. For instance:

- The hyssop branch was from a small bushy plant of the mint family. People used it for cooking, perfumes, and medicine. During passover, the father of the house took a hyssop branch and reached down and dipped it into the bowl filled with the blood of the passover lamb. Then he brushed the left door post, right door post, down to the bowl, and back up to the lintel, or header above the top of the door. If you picture that in your mind, it forms a cross, left, right, bottom, top. When Jesus was on the cross, a Roman soldier offered Him vinegar on a hyssop branch.

- Jesus could have died at anytime during the year, but God arranged it to happen on the day of passover exactly as the law of Moses required. There are amazing similarities when you compare the passover and the passion of Christ.

- By the time of Jesus, only lambs born in Bethlehem, the city of David, the city of shepherds, were considered eligible to be a passover lamb. Jesus was born in a stable in Bethlehem and laid in a manger. The perfect Lamb of God.

- The passover lamb had to be chosen on a certain day, the 10nth day of the first month. Which in 2017 would have been April 10nth. So, a lamb born in Bethlehem was chosen and brought into Jerusalem from the east, down the Mount of Olives. The lamb entered the city through the sheep gate.

On the 10nth day of the first month, Jesus, the Lamb born in Bethlehem, came down the Mount of Olives and entered Jerusalem through the sheep gate. As He entered, the people waved palm branches and shouted, “Hosanna to the Son of David! Blessed is He who comes in the name of the LORD!” The people chose Him.

- The lamb had to be carefully examined to be sure that it was without defect. Jesus was closely examined by the most educated teachers in Israel. The strictest religious leaders there tried to trap Him in His words, but they could find nothing wrong or anything that they could charge Him with. He was without blemish. Pilot said: “I find no fault in this man.”

- The law of Moses instructed that before the feast, all leaven (impurity) had to be cast out of every Israelite home. When Jesus arrived in Jerusalem, He went and cleansed the temple by driving out the money changers.

- At exactly 3 PM, the high priest ascended the altar and sacrificed the passover lamb. Then he declared, “It is finished!” At 3 PM on that day, at the moment the Passover lamb was being killed, Jesus cried with a loud voice, “It is finished!” (John 19:30) and gave up His spirit. By the way, in Greek, the words translated “it is finished” means, “The debt has been paid in full!”

Jesus is our Passover Lamb, and all of heaven recognizes it. Some of the benefits for those that accept Him are these:

* Judgment passes over those under the blood.
* The power of the enemy is completely broken.
* We are released from bondage and oppression.
* We are set free to enter into God’s promise.

I cannot emphasize strongly enough how much the enemy hates the blood of Christ, even hearing about it. Sylvia and I were in a church service with Mahesh Chavda once, who observes 40 day fasts like Jesus did. He led the congregation in a prayer and when he got to the “blood of Jesus”, a little old lady sitting behind us and to our right let out a blood curdling scream of “Noooooo!!!” until she ran out of breath, then fell to the floor and began writhing like a snake in the isle. That evil spirit within her could sit in church all day, but it could not stand hearing about the blood of Jesus. 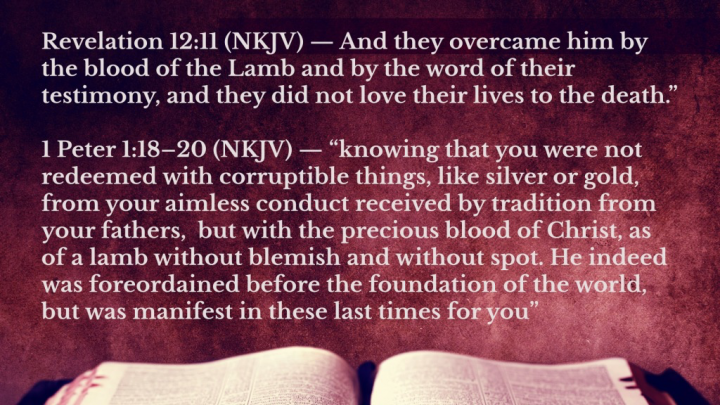 Revelation 12:11 (NKJV) — And they overcame him by the blood of the Lamb and by the word of their testimony, and they did not love their lives to the death.”

1 Peter 1:18–20 (NKJV) — “knowing that you were not redeemed with corruptible things, like silver or gold, from your aimless conduct received by tradition from your fathers, 19 but with the precious blood of Christ, as of a lamb without blemish and without spot. 20 He indeed was foreordained before the foundation of the world, but was manifest in these last times for you”

Jesus is our Passover Lamb. The Passover feast, and the events leading up to the crucifixion of Jesus run parallel. His blood seals, protects us, and sets us free from our enemy. The saints in Revelation have their robes washed in the blood of the Lamb, for without blood, there is no remission of sins. Jesus provided all that we need at Calvary.

The simple exchange that took place at the cross is that Jesus took on our sin, and we take on His righteousness. It is an intentional act and it requires our active participation. The Israelite’s had to apply the blood of the lamb to their door posts, or they would be visited by the destroyer. In order to be saved, their faith had to be strong enough that they took action on it. If they did not believe and take action, then they perished right along with the Egyptians.

Here we are today. Washing in the blood of Jesus means letting Him change your life. It still requires faith to work with Him on that day by day, and it is clear that not everyone will be saved. The hyssop branch today is your tongue. With it you apply what Jesus did to your life. Paul wrote: 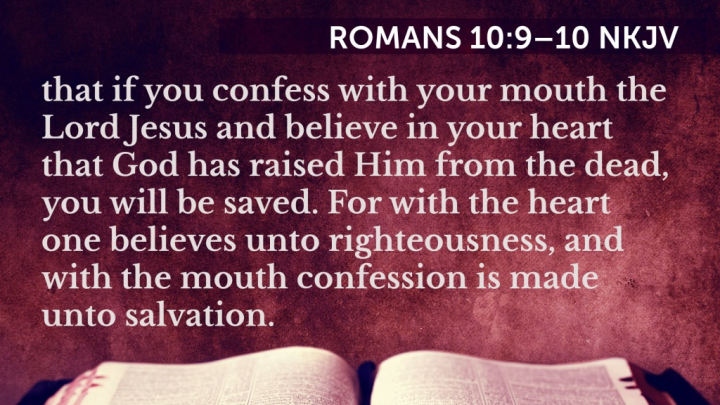 Romans 10:9–10 (NKJV) — 9 that if you confess with your mouth the Lord Jesus and believe in your heart that God has raised Him from the dead, you will be saved. 10 For with the heart one believes unto righteousness, and with the mouth confession is made unto salvation.

Our tongue is used to confess that Jesus is Lord, and believing and confessing that Jesus is Lord is how that we are saved. That is what the thief on the cross did when he said “Lord Jesus, remember me when You come into Your kingdom.”

Jesus is our Passover Lamb and it is His blood that protects us from the coming judgement. He took on our sin. We took on His righteousness. We have to believe in Him enough to allow the Holy Spirit to renew our minds and our way of thinking, to rejuvenate our spirit, and to wash us clean from the sin that clings to each of us.