Stand in the Gap

Stand in the Gap from Refreshing Hope Ministries on Vimeo.

Today I want to talk about the importance of standing in the gap for our countries, and what that means. I want to begin with a conversation that God had with Abram in Genesis. 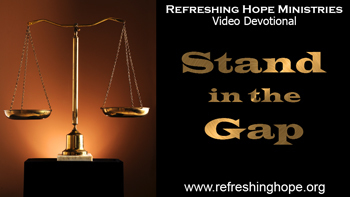 (Genesis 15:13–16 NASB)  God said to Abram, “Know for certain that your descendants will be strangers in a land that is not theirs, where they will be enslaved and oppressed four hundred years. “But I will also judge the nation whom they will serve, and afterward they will come out with many possessions. “As for you, you shall go to your fathers in peace; you will be buried at a good old age. “Then in the fourth generation they will return here, for the iniquity of the Amorite is not yet complete.”

Abram was childless at the time, but God was speaking of the future of his grandson and his descendants. Later Abram had a son named Isaac, who then had a son named Jacob (Supplanter), but after a wrestling match with God in Genesis 32:24, he was changed forever and renamed Israel (Prevails with God). God also renamed Abram (Exalted Father) to Abraham (Father of multitude).

Israel’s descendants would be enslaved for four hundred years in Egypt, then God would send Moses to bring them out with great possessions, just as He had told Abram. Then God said something very interesting: the iniquity of the Amorites is not complete.

God is so patient that He waited 400 years for the Amorites to completely fill up with iniquity and sin before He removed them from their land. He gave them hundreds of years to choose right, but they constantly chose wrong.

The Amorites, the inhabitants of Canaan, took full advantage of God’s long suffering. According to W. F. Albright, the three principal goddesses of the Canaanites  were Ashtaroth, Anath, and Asherah and they were primarily concerned with sex and war. “Sex was their primary function.” Leviticus 18:1–24 lists twelve variations of incest that were common to Canaan along with adultery, child sacrifice, sexual perversion, and bestiality, and it ends with this warning to us: “Do not make yourselves unclean by any of these things, for by all these the nations I am driving out before you have become unclean.”

There would ultimately come a day when the Amorites had reached the point of no return - their cup would be full. And that is when God unleashed a flood of Israelites out of Egypt and across the Jordan. In truth, Joshua’s invasion was actually an act of God’s justice. The history of the world is under the moral governance of God. The displacement of the Amorites by Israel was not simply the result of divine favoritism. The Amorites had long flaunted God’s moral law which was written on their hearts (Romans 2:15). 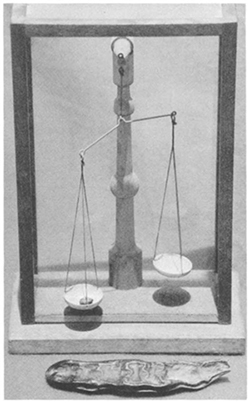 God is long suffering, but not blind. When someone commits a sin in our country, it adds to the scale and it tips a little more. When someone prays, repents, and asks for God’s mercy on our nation, then it removes a little of it. When the sin of the Amorites had reached its fullness, then God sent Israel in to destroy them. To Israel it was the new promised land. To the Amorites, it used to be home. Can we see it happen here? You betcha we can.

When sins outnumber the prayers, the scale is tilting. To be honest, in the USA, I am not even sure we can right this boat, but I pray every day for our country because that is what God told us to do.

(Jeremiah 29:7 NKJV)  And seek the peace of the city where I have caused you to be carried away captive, and pray to the LORD for it; for in its peace you will have peace.

When our nation has peace, we have peace. It is in our best interest to pray for our nation and its leaders, even if we dont like them. In Ezekiel, God sought someone to stand in the gap for Jerusalem. He wanted someone to stand up and speak for them, to intercede on their behalf, but He found no one.

(Ezekiel 22:29–31 NKJV) The people of the land have used oppressions, committed robbery, and mistreated the poor and needy; and they wrongfully oppress the stranger. So I sought for a man among them who would make a wall, and stand in the gap before Me on behalf of the land, that I should not destroy it; but I found no one. Therefore I have poured out My indignation on them; I have consumed them with the fire of My wrath; and I have recompensed their deeds on their own heads,” says the Lord GOD.

I can tell you that all the sin that is mentioned in Ezekiel and all that the Canaanites have done has been done here, and you can watch most of it on television. God sought for someone to stand in the gap so He would not have to give up on them and destroy it, but He found no one.

Think of the great flood in Genesis when every thought of man was continually evil, and God was sorry that He had even made them (Genesis 6:5). Don’t think that when mankind grows more evil that God is blind. He is patient, He is long suffering, but make no mistake about it, our scale is tilting.

Before God destroyed Jerusalem, He told Jeremiah this:

(Jeremiah 5:1 NASB)  “Roam to and fro through the streets of Jerusalem, And look now and take note. And seek in her open squares, If you can find a man, If there is one who does justice, who seeks truth, Then I will pardon her.

One person could have changed the cities fate, but God couldn’t even find one. Consider the destruction of Sodom and Gomorrah in Genesis 18. The outcry of the city had reached heaven, and it literally means the cries of its victims and the oppressed. We tend to think of Sodom as a city overrun with perverted sex but Ezekiel said this about it:

(Ezekiel 16:49–50 NASB)  “Behold, this was the guilt of your sister Sodom: she and her daughters had arrogance, abundant food and careless ease, but she did not help the poor and needy. “Thus they were haughty and committed abominations before Me. Therefore I removed them when I saw it. 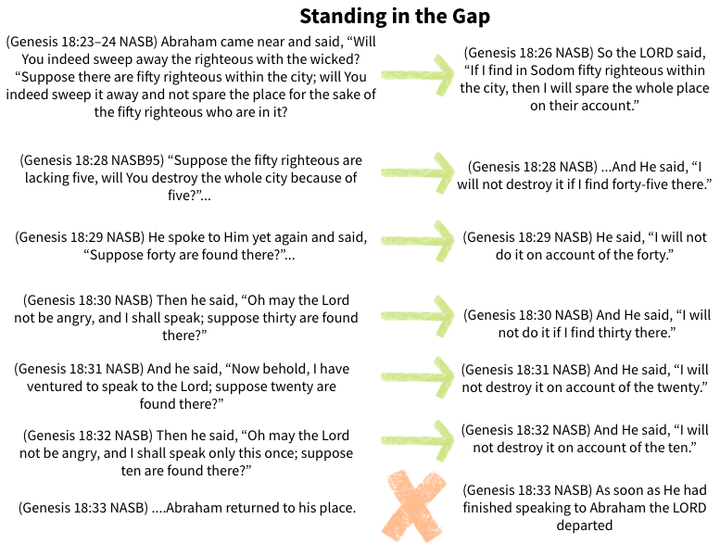 When Sodom’s cup was full and their time had come up for removal, God sent angels to confirm what He had been hearing and He shared His plans with Abraham, His friend. Abraham asked God, “What if fifty righteous people are there?” God said He would spare the whole city if He found fifty righteous there. Then Abraham said, what about 45? 30? 20? 10? And God agreed to spare the whole city if He found then righteous people there. Then Abraham stopped, and God left.

God went as far as Abraham asked Him to. He did this because Abraham stood in the gap for them and asked Him. That is the essence of standing in the gap for our cities and countries. We can make a difference. God promised Solomon this:

(2 Chronicles 7:13–14 NASB)  “If I shut up the heavens so that there is no rain, or if I command the locust to devour the land, or if I send pestilence among My people, and My people who are called by My name humble themselves and pray and seek My face and turn from their wicked ways, then I will hear from heaven, will forgive their sin and will heal their land.

Prayer: Heavenly Father, please forgive my country of its sins and draw our hearts to You. I stand in the gap today and ask for mercy on our nation and its leaders. I ask that You give us time and wisdom to get things together, and that You show us how to begin. Change our hearts. Change our minds. Bring our country back to You, in the name of Jesus Christ I pray. Amen.