Seeking or Circling from Refreshing Hope Ministries on Vimeo.

When the descendants of Abraham were enslaved in Egypt, the Lord sent Moses to bring them out of there. The Egyptian Pharaoh wasn't up for the idea initially, but the Lord changed his mind by sending a series of plagues on Egypt without harming the Hebrews living there. After Egypt was in shambles, Pharaoh changed his mind and let them go. 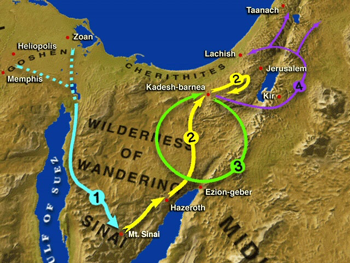 The Lord took the Hebrews to a land He had promised Abraham hundreds of years before in Genesis 12:7. Although it was only an eleven-day journey, it took them forty years to get there (Deuteronomy 1:2). Well, technically, when they first got there and saw the inhabitants were giants, they decided to stone Moses and return to slavery in Egypt (Numbers 14:3). So the Lord had to come down and break up their rock party, and that caused them a forty-year delay.

(Numbers 14:3–4 NKJV)  Why has the LORD brought us to this land to fall by the sword, that our wives and children should become victims? Would it not be better for us to return to Egypt?" So they said to one another, "Let us select a leader and return to Egypt."

(Numbers 14:26–29 NKJV)  And the LORD spoke to Moses and Aaron, saying, "How long shall I bear with this evil congregation who complain against Me? I have heard the complaints which the children of Israel make against Me. Say to them, 'As I live,' says the LORD, 'just as you have spoken in My hearing, so I will do to you: The carcasses of you who have complained against Me shall fall in this wilderness, all of you who were numbered, according to your entire number, from twenty years old and above.

Would it change the way you spoke if your words actually came to pass? "As I live,' says the LORD, 'just as you have spoken in My hearing, so I will do to you" are some of the scariest words in the Bible. The Lord was upset with them because they didn't trust Him enough to move forward. They wanted to return to the past instead.

(Numbers 14:34 NKJV)  According to the number of the days in which you spied out the land, forty days, for each day you shall bear your guilt one year, namely forty years, and you shall know My rejection.

Moses was not allowed to enter the Promised Land because he struck a rock instead of speaking to it as the Lord had instructed him (Numbers 20:12, Deuteronomy 4:21). To whom much is given, much is required. 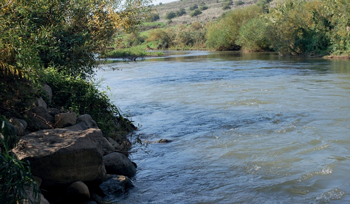 So forty years after the rebellion, Joshua led the next generation of people across the Jordan River and into the promised land. Until then, they circled a mountain, murmuring and complaining until that entire generation died off, except for Joshua and Caleb. They walked in circles until they died.

Before Moses passed, he gave the Hebrews a stern warning about what would happen to them if they forgot the covenant of the Lord.

(Deuteronomy 4:26–27 NKJV)  I call heaven and earth to witness against you this day, that you will soon utterly perish from the land which you cross over the Jordan to possess; you will not prolong your days in it, but will be utterly destroyed. And the LORD will scatter you among the peoples, and you will be left few in number among the nations where the LORD will drive you.

(Deuteronomy 4:29 NKJV)  But from there you will seek the LORD your God, and you will find Him if you seek Him with all your heart and with all your soul. 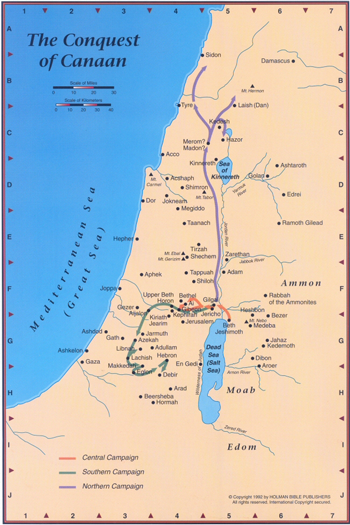 The Hebrews took possession of most of the Promised Land under the leadership of Joshua and remained faithful to the Lord until that generation passed away. But sadly, the next generation did not know the Lord as they had.

(Joshua 24:31 NKJV)  Israel served the LORD all the days of Joshua, and all the days of the elders who outlived Joshua, who had known all the works of the LORD which He had done for Israel.

(Judges 2:10–12 NKJV)  When all that generation had been gathered to their fathers, another generation arose after them who did not know the LORD nor the work which He had done for Israel. Then the children of Israel did evil in the sight of the LORD, and served the Baals; and they forsook the LORD God of their fathers, who had brought them out of the land of Egypt; and they followed other gods from among the gods of the people who were all around them, and they bowed down to them; and they provoked the LORD to anger.

When the Lord speaks a word, it is beyond the limits of time. We tend to forget what we said last week, but the Lord will faithfully fulfill His word hundreds of years later. When it doesn't happen immediately, we begin to lose hope. But His word will always come to pass at the proper time.

For example, the Lord told me thirty years ago that I would be in ministry one day, and then for the next twenty years, I worked on computers. Yet, today I am here in ministry using the skills I learned along the way to do what we do. We couldn't do it without the technical training He gave me during those years. His word is timeless and precious.

Sadly for the Hebrews, the Lord remembered what Moses had prophesied to them about forgetting Him. They forgot about the Lord who had brought them out of Egypt and began serving the pagan gods of the people around them. The Lord pronounced a judgment on them: seventy years of exile, but He left them with a promise.

(Jeremiah 29:10–12 NKJV)  For thus says the LORD: After seventy years are completed at Babylon, I will visit you and perform My good word toward you, and cause you to return to this place. For I know the thoughts that I think toward you, says the LORD, thoughts of peace and not of evil, to give you a future and a hope. Then you will call upon Me and go and pray to Me, and I will listen to you.

Moses was a prophet, and he gave an incredibly accurate prophecy about the invasion that would happen hundreds of years later. The Babylonians destroyed Jerusalem and carried the surviving inhabitants into exile.

(Deuteronomy 28:47–48 NKJV)  "Because you did not serve the LORD your God with joy and gladness of heart, for the abundance of everything, therefore you shall serve your enemies, whom the LORD will send against you, in hunger, in thirst, in nakedness, and in need of everything; and He will put a yoke of iron on your neck until He has destroyed you."

(Deuteronomy 28:49 NKJV)  "The LORD will bring a nation against you from afar, from the end of the earth, as swift as the eagle flies, a nation whose language you will not understand"

It was fulfilled to the letter. Moses could see the "high and fortified walls" of Jerusalem, which had not been built yet. And the Chaldeans, a nation who would come from afar and whose language they wouldn't understand. Still, there is hope.

One of the young Hebrews captured was Daniel, a descendant of King David. Daniel lived during a complicated time in Israel when all hope was lost. He was taken to Babylon and became a eunuch servant in the king's palace. Yet, he diligently sought the Lord three times a day in prayer and fasted for weeks at a time, even when it was illegal to do so (Daniel 6:1).

Daniel was so gifted that the king decided to put him in charge of the province and chief administrator over all the wise men of Babylon. His co-workers became envious of him. So they tricked the king into passing a law forbidding prayer to anyone but him. Daniel continued to pray to the Lord three times a day as he always did, and they caught him and brought it up with the king.

The king knew they had duped him into signing a law that couldn't be changed in order to get rid of Daniel. He was angry about it, but as the law required, he had Daniel thrown into a hungry den of lions. The Lord shut the mouths of the lions, and they didn't harm Daniel. He and the lions spent the night together in that pit until the king came and let him out the next morning. Then the king gathered up those who had duped him into signing that stupid law, and he had them and their families thrown into the lion's den. They were partially eaten before they hit the floor.

So even though Daniel lived during the seventy years of judgment and in a pagan nation, the Lord made exceptions for those who sought Him. Daniel sought the Lord with all his heart, and when he needed help the most, the Lord was there for him. Seeking the Lord has its rewards, and it is required that we believe that.

(Hebrews 11:6 NKJV)  "But without faith it is impossible to please Him, for he who comes to God must believe that He is, and that He is a rewarder of those who diligently seek Him."

(Proverbs 8:17 NKJV)  "I love those who love me, And those who seek me diligently will find me."

(Deuteronomy 4:29 NKJV)  "But from there you will seek the LORD your God, and you will find Him if you seek Him with all your heart and with all your soul."

Whatever the circumstance, do your best, and He'll take care of the rest. When you seek the Lord with all your heart, He will be found by you, just as with Daniel.

Prayer: Heavenly Father, please help me see the big picture and get in tune with what You are doing on Earth today. Make what is important to You important to me, and give me a clear vision of what You have in store for me. Put me where I need to be for such a time as this. In the name of Jesus Christ, I pray. Amen!