Today I want to talk about getting your life back on course after a mistake. Walking with God is a bit like traveling with a GPS. You can miss an exit or make a wrong turn and the GPS will recalculate your route to get you to your destination, from wherever you are at that moment.

The Holy Spirit works much the same way. We can make a complete mess of our life, but if we sincerely turn to God and ask Him for help, He will forgive us for whatever we have done and guide us back onto His path from wherever we are.

There is always hope for with His help. We can change, we can get free of the past. We can make a clean break and begin to put our life back together. When we give our life to Him, He will help us. The right doors will begin to open and things will begin to fall into place. Divine opportunities begin to happen once again. 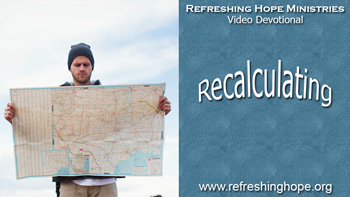 Solomon wrote this in Proverbs 24:16: “For a righteous man falls seven times, and rises again, But the wicked stumble in time of calamity.” (Proverbs 24:16 NASB).

The righteous do fall, but they recover. They get back up. We may be down for the seventh time, but we are not out of the game. Why? Because the Holy Spirit will always help us get back up when we sincerely pray and ask for help.

David said it this way in Psalm 34: “The righteous cry, and the LORD hears And delivers them out of all their troubles. The LORD is near to the brokenhearted And saves those who are crushed in spirit. Many are the afflictions of the righteous, But the LORD delivers him out of them all.” (Psalm 34:17–19 NASB).

If we ask, He will help us. He stands at the door and knocks, but He does not barge in uninvited. The righteous cry out, and the Lord hears and delivers them. No matter what we have done in the past, the slate can be wiped clean and we can have a fresh start. Paul wrote this in Romans 8:38:

“For I am convinced that neither death, nor life, nor angels, nor principalities, nor things present, nor things to come, nor powers, nor height, nor depth, nor any other created thing, will be able to separate us from the love of God, which is in Christ Jesus our Lord.” (Romans 8:38–39 NASB).

There is no power strong enough, and there is no sin dark enough to separate us from the love of God, or His help, not even death. When we make a mistake and stumble in some way, the enemy is quick to jump on our back like we are a packhorse and use shame to drive us away from God, who is the only One that can help us. We can feel like God is angry because we failed again, but the Lord already knew it was coming, and He chose us anyway.

Think of Peter in Mark chapter 14:  And Jesus said to them, “You will all fall away, because it is written, ‘I WILL STRIKE DOWN THE SHEPHERD, AND THE SHEEP SHALL BE SCATTERED.’ “But after I have been raised, I will go ahead of you to Galilee.” But Peter said to Him, “Even though all may fall away, yet I will not.” And Jesus said to him, “Truly I say to you, that this very night, before a rooster crows twice, you yourself will deny Me three times.” But Peter kept saying insistently, “Even if I have to die with You, I will not deny You!”  (Mark 14:27–31 NASB).

When Jesus told His disciples that He would be killed and they would be scattered, Peter insisted that even if they all fell away, he would not. Jesus told Peter that he would deny knowing Him three times that very night. Peter said “Even if I die, I will not deny You!” Which of them was right? About forty verses later in Mark 14:66 we read this:

“As Peter was below in the courtyard, one of the servant-girls of the high priest came, and seeing Peter warming himself, she looked at him and said, “You also were with Jesus the Nazarene.” But he denied it, saying, “I neither know nor understand what you are talking about.” And he went out onto the porch.

The servant-girl saw him, and began once more to say to the bystanders, “This is one of them!” But again he denied it. And after a little while the bystanders were again saying to Peter, “Surely you are one of them, for you are a Galilean too.” But he began to curse and swear, “I do not know this man you are talking about!” Immediately a rooster crowed a second time. And Peter remembered how Jesus had made the remark to him, “Before a rooster crows twice, you will deny Me three times.” And he began to weep.” (Mark 14:66–72 NASB).

Jesus knew that Peter would deny knowing Him three times that night, though Peter swore that he would never, ever, ever, do that. It was a mistake, and it grieved Peter so much that he decided to return to his old way of life. He told the others, “I’m going fishing”, but Jesus did not become angry at Peter nor write him off as a failure.

Later Jesus met Peter on the beach and told him to go “feed My sheep.” Jesus had known what was coming before it ever happened, so don’t think that your frailties catch Him off guard. He knows who we are better than we do. The Lord simply recalculated Peter’s path and got him back on course, back in his ministry, and He will do the same for us.

My message is that nothing that you have done has put you so far off course that it cannot be corrected. No matter where you are in life, Jesus will help you get back on track. Don’t let the enemy tell you otherwise.

Prayer: Heavenly Father, I pray that You forgive me of anything that I have done wrong. Please cleanse me, deliver me, and set me free of anything that holds me back. Break the chains off me, recalculate my course, and help me get in tune with You. I want to live my life for You from this day forward. In the name of Jesus Christ I pray. Amen.