The sheep hear his voice, and he calls his own sheep by name and leads them out. When he has brought out all his own, he goes before them, and the sheep follow him, for they know his voice. A stranger they will not follow, but they will flee from him, for they do not know the voice of strangers. John 10:2–5 ESV

Thank you for reading our devotional and being a part of our ministry. This is our monthly update on what is happening here at Refreshing Hope Ministries. I feel that the Lord is sending out an urgent call, a plea for people to turn to Him. No matter what they have done, or where they are in life, there is a full pardon through Jesus if they will just turn to God and ask for it. The rapture, pre-tribulation, mid-trib, post-trib = Irrelevant. You are one breath, one  heartbeat, or one gunshot from meeting the Lord right now. Live ready to die. Live intentionally for God so that if you did die, it would not matter.

I had one of the most amazing dreams on October seventeenth. In this dream Sylvia, me and some others were on a bus. There were people at the front and back of the bus, and Sylvia & I were near the middle. As we sat there, I noticed a small gold light near a stack of books on the floor. I got up and started to inspect it more closely, then Sylvia noticed it as well and came over. As we did, It started gently raining gold dust on us. We held out of our hands to catch some of it and when we did, it began to increase. Soon, it was raining gold dust on everyone and filling our hands. We could look up into it and it did not hurt our eyes.

As we held out our hands in awe and caught the gold dust, it slowly became golden manna. One side resembled a saltine cracker, while the other side was shiny gold. It was small at first, then it became larger until it was almost the size of your hand. It poured down on us and began stacking up around us. You could eat it; it tasted great and had healing power that restored your body. It continued to rain golden manna all over us and I thought, “Wow, this is really going to be a game changer.” I felt in the dream that it was a turning point in our life. Like I had waited my whole life for this moment, and now it was here. Then I woke up. I am not sure what all the dream means yet, but it is coming, it is going to be good, and it will be steadily increasing.

The Daily Word of Hope is beginning to be read around the globe. Each day we answer emails from people in China, France, England, Canada, Mexico, Africa, India, Spain and many other countries. People from all over the world are telling us that they feel that God is speaking to them through the messages. Many feel that it was written especially to them that day and call the messages “inspired” or the writer “gifted”.

I laugh because it is actually written by a high-school dropout that grew up on a farm in rural South Carolina. Yes, I did go back to school and get a degree in Theology, but I am nobody special. I just pray a lot and spend time sitting at the Lord’s feet. So how does someone in China feel that I know them so well and what they are going through on that day?

The Holy Spirit. Jesus said “My sheep hear My voice” (John 10:27) and that happens through the Holy Spirit who lives inside of you, and inside of me. You may hear the Lord speaking to you through our writing, but it is not us doing it. We are merely a water hose that He chooses to flow through. The Holy Spirit is the living water that flows through it and touches you. God wants a personal relationship with you, and He is teaching you to hear His voice, so pay attention. He will still be with you long after we are gone. It is our goal to point you to God and teach you to hear His voice, and we do that through the Internet. We like to teach people to fish for themselves…

Here is what has been happening at Refreshing Hope Ministries:

- We have had 892 prayer requests come into the prayer network over the last thirty days, and our prayer partners have sent 1,982 replies!

- We now have the equipment to record podcasts and I plan to attempt to record this newsletter as an mp3 on our website. It will be under the news tab.

- We have been slowly gathering parts to upgrade the RHM network here. Being a new ministry and starting with nothing, we have had to make do with what we could get our hands on. For the geeks out there, the Daily Word is currently sent out on a Dell 2500 Pentium III server (2001) that is now thirteen years old. It is built like a tank but it takes over six hours to send out the daily word each morning, so we start it at 2 AM. We found a couple of newer servers (2008 R900s) on eBay and plan to change them out this month. The prayer network and website should be much faster, and the daily word should arrive earlier for some. We will also have a spare in place in case one of them fails. 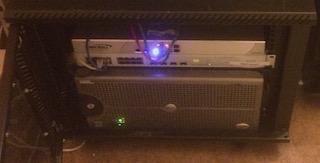 Our kitchen table during this upgrade: 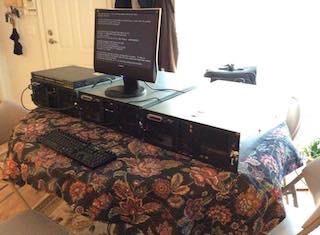 - While searching for newer equipment, I came across a Craigslist post where they were clearing out a building and we went to look. We bought an almost new server rack and 6 Cisco and IBM switches “as is” for $180. When I got them home, said a prayer over it all, 5 of the 6 worked perfectly. They are older now but cost thousands when they were new and are much better than we have. Also we will have a backup in case one them fails. 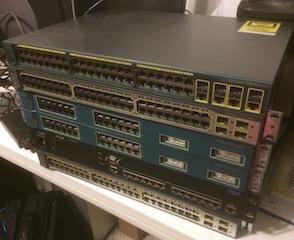 - There were several small fixes in the prayer network. Hopefully submitting a prayer is now easier.

We thank you so much for reading this far down, for your prayers, and for supporting Refreshing Hope Ministries. We want to spread the good news around the world that the Father is calling. It does not matter where you have been or what you have been doing, He wants you to talk to Him. He wants you to hear His voice, and we cannot do this without you.

I pray that the Lord will move in your situation. May the Lord bless you, keep you, prosper you, restore you, protect you, and work His perfect will in your life, in the mighty name of Jesus.