Today I want to talk about feeling overwhelmed by the things that you are facing. Sometimes life hands us things that seem too weighty, too much to deal with. Let’s begin by looking at a little Bible history. 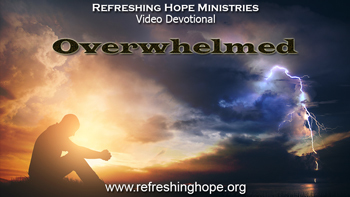 Jeremiah, the Old Testament prophet, prophesied for around forty years, warning backslidden Israel that disaster was coming. As he wrote these letters, King Zedekiah would burn them in the fire and ignore him. Jeremiah’s warnings made many people unhappy and he was sometimes beaten and thrown into jail, or a pit. Some of the people wanted to put him to death, and there were many false prophets that prophesied the exact opposite of what he said.

In 586 BC as Jeremiah had prophesied, the Babylonians under Nebuchadnezzar invaded Judah, captured Jerusalem, burned and pillaged the entire city and Solomon’s temple. It was a horrible siege that lasted between 18 to 30 months until the inhabitants of Jerusalem starved and some turned to cannibalism.

After the city was captured, Nebuchadnezzar carried most of the people into exile and took them to Babylon, including Daniel. Then the Babylonians returned and razed the city to the ground. According to Jeremiah 29:10, Judah would stay in exile for the next 70 years. Isaiah had prophesied over a century before this that a man named Cyrus would command that Jerusalem be rebuilt and the temple foundation laid once again (Isaiah 44:28). Isaiah prophesied this long before the city was destroyed, and 150 years before Cyrus was born.

In 539 BC a man named “Cyrus the Great” captured Babylon and a year later, he allowed the exiled Jews to return home and begin rebuilding Jerusalem and the temple (Ezra 1:1). They laid the foundation for the second temple in Jerusalem, probably on the site of Solomon’s temple, which had been destroyed.

Jerusalem had been reduced to a giant pile of rubble so this was a daunting project. The inhabitants of the land, Samaritans, offered to help build the temple and be part owners, but they were pagans and worshiped foreign gods, so the returning Jews refused to work with them. The spurned Samaritans began to frustrate their work, and to threaten and intimidate them. They sent letters to the Persian rulers over the land saying that the Jews were planning a rebellion, and a decree to halt the work was sent out. The work on the temple was stopped by force.

King Cyrus died and was succeeded by his son, who then ruled until his death and was succeeded by another. After many years, King “Darius the Great” came to power. This king searched the royal records, found the decree of Cyrus, and ordered the temple at Jerusalem to be completed.

The temple foundation had sat bottlenecked by red tape and surrounded by enemies for 15 years. The excitement was long gone. The people that had begun working on it years ago had moved on to other things, or passed on. It was nowhere near as elaborate as the temple of Solomon that had been destroyed, but it was still a giant project. It was during this time that an angel appeared to Zechariah and told him this:

(Zechariah 4:6 NKJV)  So he answered and said to me: “This is the word of the LORD to Zerubbabel: ‘Not by might nor by power, but by My Spirit,’ Says the LORD of hosts.

They would finish the temple. Not by might nor power, but by His Spirit. They began to work on the temple again and completed it in the spring of 516 BC, twenty years after the return from captivity. From the first deportation to the completion of the second temple was 70 years. The construction of the second temple at Jerusalem had been stalled for 15 years by orders from the rulers. The people surrounding them were their enemies threatening to kill them. At times the builders had to work with one hand and hold a spear in the other, or have armed guards watching in shifts, but they successfully completed the work by His Spirit. We do our part, and He takes care of the parts that we can’t. It is not always easy.

His Spirit works unseen in the background and inside of us. God is able to move, and remove kings if necessary. He can clear the way for His work to be done. There is nothing, there is no one, that can stand in His way. There is no one that can stop His plans. Everything is done through His Spirit working through us. It is our hands and feet doing the work, but it is His Spirit that guides, inspires, strengthens, provides, protects, and causes the right things to fall into place when we need them.

We are working on some pretty large projects here at the moment, at least for me, and as I was praying about them this week, I felt the Holy Spirit ask me this: “How do you read a novel?” I thought about it for a moment and He said: “One page at a time.” That is the key when you begin to feel overwhelmed. Stop worrying about tomorrow and just concentrate on making today count. Don’t worry about the book, concentrate on the paragraph. Let His Spirit help you. Stop and ask Him for advice. You are not alone. When tomorrow comes, there will be fresh grace that comes along with it.

Prayer: Heavenly Father, please guide me and speak to me in a way that I understand. Fill me with Your Holy Spirit and cover me with Your peace. Help me take on the mind of Christ who could sleep peacefully during the storm, in the name of Jesus Christ I pray. Amen.