Today I want to talk about life or death, in the Spirit. God is the Giver of life, and He breathed the breath of life into Adam in the beginning. His Spirit brings a freshness, a revitalization, freedom, an excitement, It gives life to our spirit. Scripture is very clear about this:

“For the letter kills, but the Spirit gives life.” 2 Corinthians 3:6 ESV 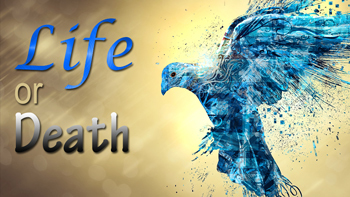 The opposite of life is death, and it has a poster child as well named satan. Peter wrote: “Your adversary the devil prowls around like a roaring lion, seeking someone to devour.” (1Peter 5:8 ESV). Jesus said that “The thief comes only to steal and kill and destroy. I came that they may have life and have it abundantly.” (John 10:10 ESV).

Life and death are opposites. Don’t think of the enemy as someone in a red suit with a pitchfork. Nope, satan / lucifer / the day star, was probably the most drop dead gorgeous being that was ever created. He was a supreme archangel, and possibly the worship leader in heaven, until he was blinded by pride. He decided that he could be God, recruited a third of the angels to rebel with him, but lost and was booted out of heaven. You can read more about this in Ezekiel 28 and Isaiah 14. He is very religious, and well versed in keeping up a holy outward appearance. Inside though, he was full of pride and death: all the outwards acts, without the inward fruit of love, joy, peace.

In the Old Testament, Solomon had built a beautiful temple, and they offered sacrifices there every day. Eventually Solomon was led astray by his many, many, beautiful wives and he began to follow their gods as well. He would marry an Egyptian and then start attending church with her, etcetera. He did that about 700 times, and each generation got further and further away from their first love, from true worship. Eventually it became rote repetition of religious acts, with the blind leading the blind.

In Amos 7:10, God sent the shepherd Amos to prophesy to Amaziah, the high priest of the temple at Bethel. God had to use a farmer to try and speak to the high priest, who no longer listened, but was still there offering daily sacrifices. They ran the prophet Amos off. This happened many times like in 1Kings 13. The priests kept offering their daily sacrifices, spiritually deaf, and completely ignoring what God was trying to tell them, then killing His messengers. Jesus covered it in His parable of the Tenants in Matthew 21:33. This hypocrisy became sickening to God.

In Malachi 1:10 the Lord said: “Oh that there were one among you who would shut the doors, that you might not kindle fire on my altar in vain! I have no pleasure in you, says the LORD of hosts, and I will not accept an offering from your hand.”

When Jesus came, He brought life, renewal, a freshness that the people had not experienced before. The tax collectors, prostitutes, sinners who were excommunicated from the temple, were drawn to Him because He was love, He was life, He was fun to be around, He was forgiving and non-condemning.

In the religious circles though, Jesus regularly butted heads with the earthly representatives of death, and they so hated Him. They were so jealous and envious of the life that Jesus carried, the miracles, and the crowds that followed Him. The harshest words that Jesus spoke were towards the religious dead, the walking dead, who thought they were alive. In John 8 He said this:

“You are of your father the devil, and your will is to do your father’s desires. He was a murderer from the beginning, and does not stand in the truth, because there is no truth in him. When he lies, he speaks out of his own character, for he is a liar and the father of lies.” (John 8:44 ESV).

These pharisees were the religious elite of the day, the ones that you would look up to. They wore the long robes, and said the long prayers. The strange part apart, about this verse, is that they thought that God was their father, yet Jesus told them that it was the devil who was actually their father. This was worse than Star Wars when Luke Skywalker found out that Darth Vader was his dad. El diablo was their dada.

Jesus rebooted the dead religious system of the day, and returned it to a personal relationship with God. We are the temple of God, and His Spirit lives inside of us (1Corinthians 3:17). He tore open the veil in the temple that had separated God and man, and now we can come boldly to the throne of grace (Hebrews 4:16). We are accepted, and the Holy Spirit brings life, forgiveness, grace, wisdom, and spiritual gifts with Him as well.

I want to take a moment and compare life and death, because sometimes they are confused. Outside they look deceptively similar, but Jesus said that you will know a tree by the fruit that it bears (Matthew 12:33, Luke 6:44). He also said: Beware of false prophets, who come to you in sheep’s clothing but inwardly are ravenous wolves. You will recognize them by their fruits. (Matthew 7:15 ESV). The fruit that we are looking for is the fruit of the Spirit: love, joy, peace, kindness, goodness, faithfulness, gentleness, self-control (Galatians 5:22-23).

A key difference is this: Are you still teachable, or are you already set in stone, rejecting anything new. Death holds tightly to “that old time religion” and the “traditions of the elders”, while God is busy restoring life to the church as it comes out of the dark ages and apostasy.

Jesus said:  Well did Isaiah prophesy of you hypocrites, as it is written, “‘This people honors me with their lips, but their heart is far from me; in vain do they worship me, teaching as doctrines the commandments of men.’ You leave the commandment of God and hold to the tradition of men.” And he said to them, “You have a fine way of rejecting the commandment of God in order to establish your tradition!” (Mark 7:6-10 ESV).

Today choose life. Be flexible and don’t get in a rut. Let God shape you. Let Him work with you as He is the potter, and we are the clay. Remain teachable. We don’t know everything, yet. Don’t believe that God is unapproachable. Jesus touched the lepers when everyone else avoided them. It is death that lies and tries to be the middle man between us and Jesus, and he will never want you meet Him. Going to church doesn’t make you a Christian. Knowing Jesus does.

Death will try and drive you away from Him, dry you up with religious repetition, and burn you out practicing a lot of religious acts all while keeping you from ever knowing Jesus. The simple fact is that God loves us, He understands us, and He accepts us. He first loved us. The Holy Spirit will bring new life and purge death from our lives if we remain teachable, and just allow Him to change us little by little.

Prayer: Heavenly Father, please cleanse me from dead works and refine me from the inside out. I choose to believe that You love me, that You forgive me, and that You hear my prayer today. Please protect me from deception for I want to ally myself with You, and to be part of what You are doing. Come and be a part of my life today, in the name of Jesus Christ I pray. Amen.

Note: For those following our online Bible Study, the latest chapter, covering Acts Chapter 25, is now available! We hope you are blessed by this in-depth study of His Word.