I AM Coming Again

I AM Coming Again from Refreshing Hope Ministries on Vimeo.

On the night of the last supper, after Judas Iscariot had left the room, Jesus had a discussion with the eleven apostles who remained. He knew Judas had left to betray Him and that His time left on Earth was short. So He said these words to comfort His disciples:

(John 14:1–6 NKJV)  "Let not your heart be troubled; you believe in God, believe also in Me. In My Father's house are many mansions; if it were not so, I would have told you. I go to prepare a place for you. And if I go and prepare a place for you, I will come again and receive you to Myself; that where I am, there you may be also. And where I go you know, and the way you know."

Thomas said to Him, "Lord, we do not know where You are going, and how can we know the way?" Jesus said to him, "I am the way, the truth, and the life. No one comes to the Father except through Me."

In a matter of hours, Jesus would be arrested by a mob while praying in the garden. His disciples would be scattered just as had been prophesied:

(Mark 14:27 NKJV)  Then Jesus said to them, "All of you will be made to stumble because of Me this night, for it is written: 'I will strike the Shepherd, And the sheep will be scattered.'"

Jesus was the Shepherd, and his disciples were the sheep who were scattered. Jesus was quickly rushed through a mock trial in the middle of the night, but His sentence had already been determined long before He was arrested. The envious religious leaders wanted Him gone, for He made them look like white-washed tombs. Spiritually dead and rotten inside, yet dressed in long flowing robes. Outward appearances will deceive you every time.

The disciples were scattered, heartbroken, stunned by the recent events. The Lord Jesus Christ, the Anointed One, the King of Kings, was scourged, crucified, and lay lifeless in a tomb. It all seemed so final. Yet, the story doesn't end there.

Jesus Christ rose from the dead and left the tomb. He appeared to the disciples several times over the next forty days, then He said goodbye to them and ascended to heaven. He left them with the knowledge that He was going to prepare a permanent home for them. There would be no more rent, no mortgage, and praise God, no more broken plumbing.

That's what's happening right now. Jesus is preparing permanent homes for us to stay in. A home where we truly belong, and no one can tell us to leave. We will be with Him for eternity in a place of peace and safety where the wicked are not even allowed to enter.

Jesus Christ is coming again. To those who love God, let not your hearts be troubled. Heaven awaits, and even death speeds it along. It's the ultimate pain-free retirement plan and the best investment you will ever make. Yet, it will be the most terrifying day the Earth has ever seen to those who don't believe or just didn't have the time. The ending words in the book of Malachi, the last chapter in the Old Testament, describes what is coming: 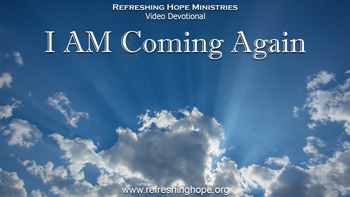 (Malachi 4:1–3 NKJV)  "For behold, the day is coming, Burning like an oven, And all the proud, yes, all who do wickedly will be stubble. And the day which is coming shall burn them up," Says the LORD of hosts, "That will leave them neither root nor branch.

But to you who fear My name The Sun of Righteousness shall arise With healing in His wings; And you shall go out And grow fat like stall-fed calves. You shall trample the wicked, For they shall be ashes under the soles of your feet On the day that I do this," Says the LORD of hosts.

Ashes to ashes, dust to dust. The wicked are trampled by the righteous. What a reversal. The day of the Lord is coming, and you don't want to be found on the wrong side of the door when it finally closes:

(Zephaniah 1:14–18 NASB)  Near is the great day of the LORD, Near and coming very quickly; Listen, the day of the LORD! In it the warrior cries out bitterly. A day of wrath is that day, A day of trouble and distress, A day of destruction and desolation, A day of darkness and gloom, A day of clouds and thick darkness, A day of trumpet and battle cry Against the fortified cities And the high corner towers.

I will bring distress on men So that they will walk like the blind, Because they have sinned against the LORD; And their blood will be poured out like dust And their flesh like dung. Neither their silver nor their gold Will be able to deliver them On the day of the LORD'S wrath; And all the earth will be devoured In the fire of His jealousy, For He will make a complete end, Indeed a terrifying one, Of all the inhabitants of the earth.

When Jesus Christ appears, it will be the end of time as we know it. There will be smoke, fire, and darkness. There will be no more time to repent or pray, for that invitation expired last night.

(Matthew 13:40–42 NKJV)  Therefore as the tares are gathered and burned in the fire, so it will be at the end of this age. The Son of Man will send out His angels, and they will gather out of His kingdom all things that offend, and those who practice lawlessness, and will cast them into the furnace of fire.

The Lord Jesus Christ prophesied that His return to Earth would happen much like the days of Noah. It will just appear to be another day here, business as usual. Yet, last night, something happened behind the scenes: The stairway to heaven disappeared, and now it's too late to change the road you're on.

(Luke 17:26–30 NKJV)  And as it was in the days of Noah, so it will be also in the days of the Son of Man: They ate, they drank, they married wives, they were given in marriage, until the day that Noah entered the ark, and the flood came and destroyed them all.

Likewise as it was also in the days of Lot: They ate, they drank, they bought, they sold, they planted, they built; but on the day that Lot went out of Sodom it rained fire and brimstone from heaven and destroyed them all. Even so will it be in the day when the Son of Man is revealed.

Do you see what happened? According to Genesis 7:16, Noah and his family entered the ark, and the Lord closed and sealed the door behind them. Then the rain began to fall. By the time the people realized what was happening, it was too late to get on board. The day Lot and his family left Sodom, it began to rain fire on the city. The people there woke up that morning thinking it was just another day like the last, but instead, it was their last.

Jesus Christ is coming again. He is bringing a reward for the faithful, an eternal home in paradise. He will wipe away every tear, and sickness and death will no longer exist. Yet, for those going to bed tonight who are not ready. You have to ask yourself one question: Do you feel lucky?

Prayer: Heavenly Father, please forgive me of my sins. Draw my heart to You, and be my Lord from this day forth. I want to live with You for eternity. My life is Yours, Lord. Use me as You like. In the name of Jesus Christ, I pray. Amen!