Hiding in the Garden

Hiding in the Garden from Refreshing Hope Ministries on Vimeo.

Today I am going to be talking about: “Hiding in the Garden”.  Adam and Eve walked with God in the garden of Eden, but when they broke the one commandment they were given, they suddenly had an overwhelming desire to hide from His presence:

Genesis 3:8–11 (NKJV) — And they heard the sound of the LORD God walking in the garden in the cool of the day, and Adam and his wife hid themselves from the presence of the LORD God among the trees of the garden. Then the LORD God called to Adam and said to him, “Where are you?” So he said, “I heard Your voice in the garden, and I was afraid because I was naked; and I hid myself.”  And He said, “Who told you that you were naked?”

Yes, who had told them… see there was a third party involved. The serpent, satan, acting like he was their friend, had lied to them and gotten them to disobey God’s one commandment. Then that friend, becomes an enemy. We were made in the image of God, and satan will always hate that. He came to steal, to kill, and destroy.

1 Peter 5:8 (NKJV) — “Be sober, be vigilant; because your adversary the devil walks about like a roaring lion, seeking whom he may devour.”

“Whom he may devour” is talking about us. If he can get you to take his bait, then he will try and separate you from God, and from other Christians. The point is to get you alone. When a lion chases a herd of antelope, they are looking for the easiest target, the weak, those separated and alone. They are not looking for a fight. But for an easy meal.

The enemy wants to get you to fall into temptation, and then cause you to feel such shame that you want to hide from God, and separate from His people. Then you will be an easy target. He has used this method for thousands of years and it works.

So how do we counter that? Well first, it would be great if we were perfect and never sinned, but if you are like me, you may have a problem with that.  And it is not just me, Paul struggled with his inner man as well: 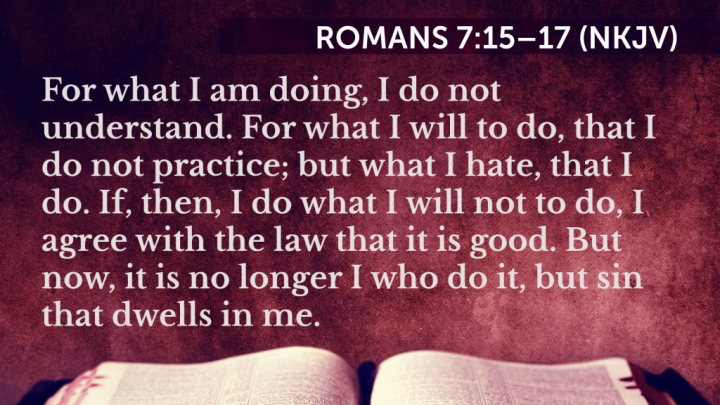 1 John 1:8–9 (NKJV) — If we say that we have no sin, we deceive ourselves, and the truth is not in us. If we confess our sins, He is faithful and just to forgive us our sins and to cleanse us from all unrighteousness.

See we all have sin, so when you separate from God’s people, it is just one sinner hiding, from the other sinners. The problem is that Jesus is the One that can help you overcome and deliver you from the bondages that hold us, and when you separate yourself from Him, you take away the only hope for freedom.

So when you stumble, get back up and keep going. When you fall into sin, keep on praying, hang onto God with both arms. You will pull out of it, you will come out the other side. Its not forever. Do not let the enemy separate you from Jesus and make you hide from His presence, and His people.