Today I want to talk about the potential of being a Hero, or a Monster, that exists inside each one of us. We get to choose. Once when Jesus was preaching from a boat, He told a parable about a man that sowed wheat in His field, but an enemy came along and sowed weeds behind him. We pick this up in Matthew 13:24 and following:

He put another parable before them, saying, “The kingdom of heaven may be compared to a man who sowed good seed in his field, but while his men were sleeping, his enemy came and sowed weeds among the wheat and went away. So when the plants came up and bore grain, then the weeds appeared also. And the servants of the master of the house came and said to him, ‘Master, did you not sow good seed in your field? How then does it have weeds?’ He said to them, ‘An enemy has done this.’ ” Matthew 13:24-28 ESV 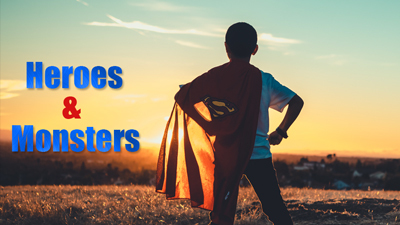 When Jesus taught this parable, He had just finished explaining the parable of the Sower who scattered seed on the ground. The seed was the word of the God, and there were four types of soil that represented people. The seed is consistently good; it is the quality of the soil that varies (Matthew 13:18).

1. There is the seed scattered along the road, the hard heart. This was like the Pharisees who at first were curious about Jesus, but when they saw Him welcome sinners and reject their traditions, they coldly rejected Him, and His words became an offense to them.

2. There is the seed scattered among rocks, the shallow heart. This soil is people with shallow faith, and it is exposed the moment outward trouble arises. When tribulations, persecutions, and various sufferings rise in their life like the scorching sun, their shallow “faith” sadly withers away. Consistently the same person who “immediately” received the gospel with joy also “immediately falls away”.

3. There is the seed that was scattered among thorns, the strangled heart. This soil represents those who let the love of worldly things, and especially the love of money, prevent them from committing to Jesus. Matthew 6:24 tells us that “No one can serve two masters, for either he will hate the one and love the other, or he will be devoted to the one and despise the other. You cannot serve God and money.” I can tell you from experience that He will force you to choose. He will relentlessly pursue the issue until you either reject Him, or surrender your wallet and trust Him.

4. Finally there is the good soil, the surrendered heart. The one who hears the word, understands it, and endures to bear fruit regardless of the circumstances. Jesus repeatedly tells us in Matthew—that if you follow Him, suffering will follow you. Endurance is part of the basics of Christianity as in: “Take up your cross and follow Me” and “the one who endures to the end will be saved” (Matthew 10:22, 24:13). Jesus immediately followed that explanation with the parable of the wheat and tares.

The weeds, or tares that Jesus mentioned, are believed to be bearded darnel, a strong grass that closely resembles wheat or rye in appearance. It is sometimes referred to as ‘drunken darnel’ because the seeds are poisonous. Consuming the seeds can cause blindness, dizziness, and sometimes death. It is extremely difficult to distinguish darnel from wheat in its early stages, so it is left to grow until the harvest when it can be carefully separated. As they mature, the wheat seeds become noticeably larger than the darnel and they can be filtered out.

The kingdom of God is within us, and in a sense, we are God’s field. We have both the good seed, and the bad planted within us. What we water will grow, and what we starve will die. One will eventually outnumber the other. There is always hope, but like getting in early on a good investment, the later you wait, the less the returns. Those that lay up treasure in heaven all their lives will obviously have more than those that get saved on their death bed, though both will be saved. For example, in Mark 10:40, James and John asked to sit on the right and left hand of Jesus in His kingdom, but He told them that had been prepared for someone else. That means that someone will be sitting closer to Jesus than the beloved Apostle John. Where we get to sit will be determined as well, apparently by our actions in this life.

Our enemy is not the sinner next door, it is spiritual. The war is usually the things inside of us that lead us into rebellion against God, that tempts us away from close fellowship with the Holy Spirit. James wrote: “each person is tempted when he is lured and enticed by his own desire. Then desire when it has conceived gives birth to sin, and sin when it is fully grown brings forth death.” (James 1:14-15). Sin is pictured here as growing within someone like a baby. Each day we are growing in one kingdom, or the other, whether we like it or not.

Contrary to popular belief, the Bible does not teach that everyone will be saved, or that anyone is saved without first having a personal relationship with Jesus Christ. Paul said that we are each to work out our own salvation (Philippians 2:12). Most of the time a Hero, and a Monster in the kingdom, cannot be distinguished by the outside. On the surface, we all just look like humans. God will separate them at the harvest, when they are fully matured, done growing, and our fruit is fully grown. A tree is known by the fruit it bears, and only a mature tree bears fruit. It takes a while to grow into either one.

So the potential of being a Hero, or a Monster, lives inside each of us. Thank God that because of what Jesus did on the cross, those who are a field of weeds today, can become a field of wheat tomorrow. Those that have lived life as a monster, like the thief on the cross, can choose today to live as God’s champion. It just takes us changing our course, our heart, and our mind. You can pray this with me if you like:

Prayer: Heavenly Father, please forgive me of the things that I have done in the past and give me a fresh start today. I want to live for You. I want what You want. I surrender to You, in the name of Jesus Christ I pray.