Here Comes the Son from Refreshing Hope Ministries on Vimeo.

Noah was a righteous man in his generation. He lived differently than the others. Though it had never rained on the Earth, the Lord told Noah to build an ark because there was a flood coming. Noah didn't know what day or hour the rain would start, but he believed God, and he started working on that boat. When the rain began to fall, Noah was ready.

When Jesus Christ spoke about His eventual return to Earth, He compared it to the days of Noah: 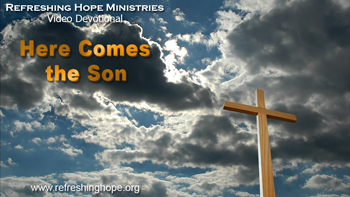 On that rainy day long ago, the clueless, the careless, the too busy, all perished. Noah was a preacher of righteousness, telling the people to get ready (2 Peter 2:5). But they saw him as a crazy old coot. After all, he had been building a giant box in his yard for around 120 years. Yet, God told Noah to keep building that boat, for when the rain comes, you're gonna wanna float.

Are we not in a similar situation? Jesus Christ told us that one day He will return to Earth, and it will be the most terrifying event in world history:

(Luke 21:25–27 NKJV)  And there will be signs in the sun, in the moon, and in the stars; and on the earth distress of nations, with perplexity, the sea and the waves roaring; men's hearts failing them from fear and the expectation of those things which are coming on the earth, for the powers of the heavens will be shaken. Then they will see the Son of Man coming in a cloud with power and great glory.

Noah was busy working on what the Lord told him to do like we should be. We all know the rain is coming. Are you working on your boat? I won't even try and estimate when the Lord will return, for it's irrelevant. We should be living like Jesus Christ will return this afternoon and focusing on completing the work He gave us.

There have been countless predictions about the return of Jesus Christ ever since He left. Yet, Jesus Himself plainly told us that only the Father knows the day and hour of His return. The angels in heaven don't even know, but some on Earth still say they do. Well, don't believe them.

While we don't actually know the day Jesus will return, here are some things we do know:

His return is going to catch many in the middle of enjoying a few moments of sin. Wouldn't that be horrifying? Don't let it be you.

(Luke 21:34–35 NKJV)  But take heed to yourselves, lest your hearts be weighed down with carousing, drunkenness, and cares of this life, and that Day come on you unexpectedly. For it will come as a snare on all those who dwell on the face of the whole earth.

As with Noah's ark, God's door is currently open, but the day will come when that door is sealed. Those who are outside of it will remain outside forever. As Paul said:

Jesus Christ has told us that He will return one day, but no one knows the day or hour. Therefore, we are to remain vigilant and watchful, knowing that Jesus Christ will return to Earth. It's not if, but when. To summarize this, here is what I understand about His return in a nutshell:

Jesus Christ is coming back as suddenly as a lightning bolt flashing across the sky and as unexpectedly as a thief in the night. Every eye will see Him, even the dead. There will be no time to go and pray or even say, "God have mercy on me." For the time of mercy will have passed, and the day of judgment will have began. When Jesus Christ returns, there will be two types of people on the Earth, the saved and the damned.

There will be no middle ground. There is no silent snatching away in secret, for Jesus Christ is coming to Earth to rule and reign. There will only be His "second coming," which occurs at the "last" trumpet, not a third or a fourth. There will be no one "left behind" when Jesus returns, or "seven years of great tribulation" afterward, during which you can repent and accept Jesus later, as you see in the movies. As I see it, that is deception, an end-time delusion leading people to believe there is always tomorrow. There isn't. Today is the day of salvation. You may be dead tomorrow.

There will be one return, and it hasn't happened yet. The clock will be ticking just as it did every day while Noah built his ark: 11:57, 58, 59, and bam! You'll be standing before the Lord Jesus Christ giving an account of your life here on Earth. Ready or not, here He is in front of you. He will either already know you that day or will never. There will be no more choices made, for the door of the ark will have already closed.

Those who have accepted Jesus as Lord will be given rewards for their actions and what they have done with the talents He gave them while He was away. Those who don't know Him will face the Great White Throne Judgement and eventually burn in a place called hell. So live your life ready to die, for even now, we are only one heartbeat away from meeting God in person.

(Romans 14:10–12 NKJV)  --- For we shall all stand before the judgment seat of Christ. For it is written: "As I live, says the LORD, Every knee shall bow to Me, And every tongue shall confess to God." So then each of us shall give account of himself to God.

Prayer: Heavenly Father, please help me be ready for the day that is coming. Help me get in tune with what You are doing and to align myself with You. Protect me from deception and open my mind to understand the scriptures. In the name of Jesus Christ, I pray. Amen!