Good From Bad: Your Worst Day Can Become Your Best

Good From Bad (Your Worst Day Can Become Your Best) from Refreshing Hope Ministries on Vimeo.

(Romans 8:28 NKJV)  And we know that all things work together for good to those who love God, to those who are the called according to His purpose. 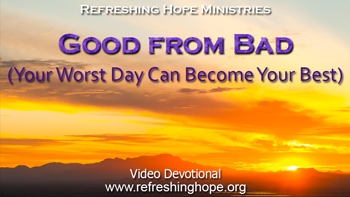 This is a promise to those who love God. If you took the time out of your day to watch or read this, then you are probably in that number. God is so powerful that He can weave the bad things that happen in our life, into something good. He can even take the bad things that people would do to you, and turn them into a blessing.

In the book of Genesis, when Jacob worked for his father-in-law, Laban kept trying to rip him off by reducing his wages. Jacob was paid in sheep at the time, and Laban had agreed to give him all the speckled sheep that were born in his flock as his wages. When the flock began bearing a lot of speckled sheep, Laban changed his mind and decided to give Jacob the more rare striped ones, but then the flock started bearing striped sheep. Laban did this to Jacob ten times, but each time God changed the color of the sheep that were being born, to match Jacob’s current wage.

(Genesis 31:4–9 NKJV) So Jacob sent and called Rachel and Leah to the field, to his flock, and said to them, “I see your father’s countenance, that it is not favorable toward me as before; but the God of my father has been with me. And you know that with all my might I have served your father. Yet your father has deceived me and changed my wages ten times, but God did not allow him to hurt me. If he said thus: ‘The speckled shall be your wages,’ then all the flocks bore speckled. And if he said thus: ‘The streaked shall be your wages,’ then all the flocks bore streaked. So God has taken away the livestock of your father and given them to me.

What Laban had intended to be bad for Jacob, became good and Jacob became rich. God is able to take bad things and bring something good out of it, because He can see the end from the beginning. He already knows what tomorrow holds and He can adjust something today to bring a certain result down the road.

Think of King Jehoshaphat in 2 Chronicles chapter 20. Several enemy armies invaded Israel intending to sack Jerusalem. The inhabitants were greatly outnumbered and scared. The king declared a fast, they gathered together and prayed, then the Spirit of the Lord showed up and gave them directions. When they marched out to meet the enemy armies in battle the following morning, Jehoshaphat put the praise team in front singing “Praise the LORD, For His mercy endures forever.”

The enemy armies were suddenly confused and began to attack one another. By the time the Israelites got there, their enemies were all dead.

(2 Chronicles 20:25 NKJV)  When Jehoshaphat and his people came to take away their spoil, they found among them an abundance of valuables on the dead bodies, and precious jewelry, which they stripped off for themselves, more than they could carry away; and they were three days gathering the spoil because there was so much.

The Israelites spent three days gathering all the loot, precious jewelry, and valuables from their enemies. God once again turned a hopeless situation, into a celebration. Praise the Lord, for His mercy endures forever.

During a season in 2011, I began to spend two to three hours every day in this room, laying prostrate on the floor praying. I felt compelled to, and there was nothing that I desired to do more. The presence of the Holy Spirit was so wonderfully tangible. It lasted about three months, and then as suddenly as the season had come, it left, and we went into a very dark time.

Our computer business dried completely up and we couldn’t find work anywhere. When we advertised, it was like throwing money in the trash. When I prayed, I only heard silence. When we gave, we just had less. When we fasted, we were just hungry.

As months went by without hearing from the Lord, I began to feel abandoned. Our bank account emptied, our credit card maxed out, and things got so bad that we could no longer pay the bills. We decided that we would have to move out of our home and in with relatives until we could find work. The week that we began packing, I came in here and sat down on a bean bag. By then, I didn’t even pray anymore. I had prayed for months without a response. I mostly came in to sit and reflect on life in the quiet.

Time I sat down, I had an open vision like a movie screen appear before me, and I saw myself climbing into a boxing ring and putting on the gloves. The camera view was behind me and it looked like I was alone, but when it panned around, I could see the Lord standing outside the ring in my corner and He said this: “You are not alone, for I AM in your corner, and I have prepared you for this day. Now get in there and fight!” Then the presence of the Holy Spirit that I had not felt in months, rushed into the room, and I broke into tears.

I knew instantly that everything was going to be alright. I came out of the room and told Sylvia what had happened and went to my computer to check Craigslist for work like I did every day then. There was an ad that must have been posted about the same time that I was in the room. It was “Wanted: Creative Arts Pastor. Must have in-depth computer skills, be able to update websites, put together video teachings…” By that Friday morning I was a pastor, and a friend stepped in and paid all of our bills for the month.

God took something bad, and He turned it into something good. That eventually led us to start RHM. Refreshing Hope would not be here today, if we had not went through the dark season that we had then. He used that time to move us into something new, to guide us, to adjust our course.

God can use things that seem bad, to steer us to where we need to be, and it ultimately works out for good. Consider the crucifixion of Jesus, it looked bad, but it was for good.

Prayer: Heavenly Father, please give me grace to get through this season. Speak to me in a way that I understand and help me see the big picture. We have no power to stand against the things coming against us; nor do we know what to do, but our eyes are on You. I choose to trust in You today, in the name of Jesus Christ I pray. Amen.