There is a lot of fear and uncertainty in the world today and I feel that many are losing their focus by spending too much time listening to the news, and too little time listening to the Lord. We must remember that what we feed in our mind will grow, and what we starve will die. Things that we focus on grow bigger and bigger. I believe that it is a good time to bring God Almighty back to our remembrance, center stage, to remember the things that He has done. 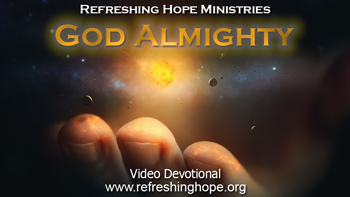 Yet the Bible should be our handbook about God, our anchor, and we should not limit Him to our experience. For example, no one walked on water, until someone did. If the Bible states that He has already done it before, then let no one convince you that He would never do it again, unless God said otherwise. He multiplied food back then, and He can multiply food today.

I want to make it clear that God is Able to take care of you in any circumstance that you face, from the beginning of your life, until the end. If you put Your trust in Him, and I mean by your actions, not just words, then He will take care of you. We don’t have to understand everything that is happening, we are to trust Him to make it work out in the end. Proverbs 3:5 is one of my anchor verses in the Bible, it is:

(Proverbs 3:5–6 NKJV) Trust in the LORD with all your heart, And lean not on your own understanding; In all your ways acknowledge Him, And He shall direct your paths.

That is a powerful promise. When we seek the Lord, think about His Word during the day, pray, and trust Him to take care of us. If we acknowledge Him in all our ways, whether working, or at school, or driving, or cooking, or cleaning, or cutting the grass, He will automatically step in and begin to direct our paths behind the scenes. We may not even know that it is happening.

This idea is consistent throughout scripture: Delight yourself in the Lord, and He will give you the desires of your heart (Psalm 37:4). Seek first the kingdom of God and His righteousness, and all these things will be added unto you (Matthew 6:33).

We may feel inspired to do something, then the Holy Spirit will open a door for us, and suddenly it becomes possible. We are to take it one day at a time, and we don’t get to understand His entire plan from the beginning. He gives us enough inspiration for today, and tomorrow there will be more. Faith is a decision followed by your obedience, not by your understanding, or your ability to accomplish it.

Today I hope to enlarge our view of what God is capable of by just lightheartedly flipping through the Bible and going over some simple, fundamental things that we all know, but may have forgotten. Maybe it will stir something within us, maybe we can get a clearer picture of just how powerful God really is.

We are talking about the God that created the universe, that said “Let there be light”; and there was light. “He also made the stars” which I believe to be one of the coolest verses in the Bible. God enabled Abraham to have a son when he was 100 years old, and his wife Sarah 99.

He parted the Red Sea and the Jordan River for His people to pass through. He fed the Israelite people in the wilderness manna from heaven, every day except on the Sabbath. Their clothes did not wear out, nor were there any diseases among them for the forty years they spent there. He gave them water when they were thirsty, sometimes from strange places, like out of rocks. He led them as a pillar of fire at night to keep them warm and to give them light, then a cloud by day to give them shade.

Sometimes when people whined and complained, they were consumed by fire. At other times, the earth opened up and swallowed them. Walled cities like Jericho collapsed when they followed His advice. Time stopped for a full day at the words of Joshua, and it ran backwards for Hezekiah.

God caused a donkey to speak to Balaam, who immediately got into an argument with her. He anointed Samson with incredible physical strength, so much so that when a lion attacked him, he ripped it in half. When the Phillistines tried to trap him in a city by locking a huge gate, Samson pulled the posts out of the ground and took the gate with him. Samson was just a man, until the Spirit of God settled on him.

God once allowed the Ark of the Covenant to be captured by the Philistines after the backslidden Israelites tried to use Him as a tool. The Phillistines then placed the Ark in the temple of their god dagon, who was made of stone, but the following morning dagon was laying on his face before the Ark. So they stood the statue back up, but the next morning dagon was laying on his face again, this time with his head and hands broken off. Then God struck the Philistines with hemorrhoids. After that, they decided they didn’t actually want the Ark, and they sent it back to Israel posthaste.

The prophet Elijah prayed that it would stop raining on Israel because they had turned away from God, and it didn’t rain for the next 3 1/2 years! During that drought, God had ravens bring Elijah meat and bread in the morning, and then again in the evening while he lived beside the brook Cherith. After the brook dried up, he went and stayed with a widow in Zarephath for “many days” who only had a handful of flour in a bowl and a tiny amount of oil in a jar, but they ate all they wanted every day, and it never ran out. Later when that widow’s son died, Elijah prayed for him and he came back to life. Then Elijah prayed for rain, and it began raining a few minutes later, breaking the long drought.

The young man Elisha became Elijah’s servant and he asked for a double portion anointing. He received it, and performed twice as many miracles as Elijah had. They both called down fire from heaven, they both multiplied food, and they both raised people from the dead. Elisha was so anointed that years after he was dead and entombed, his bones resurrected a dead man that was thrown in the tomb with him.

Over the years there were enemy armies who were struck blind, captured, then made to see again (Elisha). Others became confused and attacked each other (Gideon). 185,000 Assyrians apparently failed to wake up the next morning after an angel of the Lord visited their camp.

Jesus had so many miracles, He healed the sick, raised the dead, walked on water, multiplied food, calmed storms, and He cast out demons, but He is “Emmanuel, God with us.” So let’s continue to look at common people like you and me.

Peter the fisherman walked on water, healed the sick, and a man named Ananias and his wife Sapphira fell dead at his words after they lied to the Holy Spirit. The his prayer raised a disciple named Tabitha from the dead. The power of life and death was literally in Peter’s tongue.

Paul was a leather worker, but God caused special miracles so that even handkerchiefs or aprons taken from him and laid on the sick would bring healing and deliverance. Demons would flee at the touch of the cloth. Paul spoke, and sorcerers were stricken blind. He healed the sick, and he raised the dead.

There is so much more that I could cover, but my point is that God can control your food supply. God can multiply your resources. He can control the weather, He can heal, He can protect. He has brought the dead to life, and He has made some naughty ones, dead.

God is able to protect those who trust in Him for He has always been a delivering God. He has always been a miracle working God. He works through His people, and He has not changed, He has not stopped, and He will work through you. These that we have covered were all normal people of flesh and blood who just put God first in their life. The writer of Hebrews said it best with this:

(Hebrews 11:32–35 NKJV) And what more shall I say? For the time would fail me to tell of Gideon and Barak and Samson and Jephthah, also of David and Samuel and the prophets: who through faith subdued kingdoms, worked righteousness, obtained promises, stopped the mouths of lions, quenched the violence of fire, escaped the edge of the sword, out of weakness were made strong, became valiant in battle, turned to flight the armies of the aliens. Women received their dead raised to life again.

If God is for us, who can stand against us. Who has a resume that can compare with His? No matter what comes on the Earth, He is able to take care of His people.

Prayer: Heavenly Father, please help me see my life through Your eyes. Stir my faith and quicken my heart to understand Your word. Today I choose to trust in You, in the name of Jesus Christ I pray. Amen.