Do Not Be Dismayed

Do Not Be Dismayed from Refreshing Hope Ministries on Vimeo.

Today I want to talk about becoming “Dismayed.” To be dismayed means “to be downcast, disappointed, disheartened, filled with terror.” It replaces hope and will lead you to a dark place. We become ineffective and paralyzed. The joy of the Lord is our strength (Neh. 8:10) and it is hard to be joyful when you are dismayed.

Let’s begin in Deuteronomy 31:7 when Moses was passing the baton to Joshua, the changing of the guard: 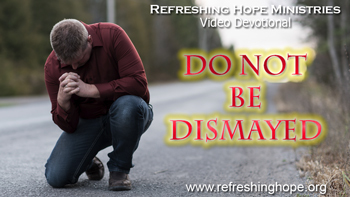 Then Moses called Joshua and said to him in the sight of all Israel, “Be strong and of good courage, for you must go with this people to the land which the LORD has sworn to their fathers to give them, and you shall cause them to inherit it. And the LORD, He is the One who goes before you. He will be with you, He will not leave you nor forsake you; do not fear nor be dismayed.” Deuteronomy 31:7–8 NKJV

The same message “Do not fear or be dismayed” is repeated several times throughout  Deuteronomy and Joshua (Deut 1:21,3:2, 22; 20:3, 31:8  Joshua 1:9; 8:1; 10:8). They were going to face trying times with difficult enemies. There would be giants. The Lord told the people, then Joshua “do not fear nor be dismayed.” He told them this because there would be a real danger of it happening. The previous generation had all died in the desert because they had become dismayed, and were terrified to cross the Jordan river and enter the promised land.

Fear will paralyze you and make you do nothing. Think of Saul and the Israelite army when they met the Philistine champion “Goliath” in 1 Samuel:

And Saul and the men of Israel were gathered together, and they encamped in the Valley of Elah, and drew up in battle array against the Philistines. The Philistines stood on a mountain on one side, and Israel stood on a mountain on the other side, with a valley between them. And a champion went out from the camp of the Philistines, named Goliath, from Gath, whose height was six cubits and a span. He had a bronze helmet on his head, and he was armed with a coat of mail, and the weight of the coat was five thousand shekels of bronze. And he had bronze armor on his legs and a bronze javelin between his shoulders. Now the staff of his spear was like a weaver’s beam, and his iron spearhead weighed six hundred shekels; and a shield-bearer went before him. Then he stood and cried out to the armies of Israel, and said to them, “Why have you come out to line up for battle? Am I not a Philistine, and you the servants of Saul? Choose a man for yourselves, and let him come down to me. If he is able to fight with me and kill me, then we will be your servants. But if I prevail against him and kill him, then you shall be our servants and serve us.” And the Philistine said, “I defy the armies of Israel this day; give me a man, that we may fight together.” When Saul and all Israel heard these words of the Philistine, they were dismayed and greatly afraid. (1 Samuel 17:2–11 NKJV).

King Saul was one of God’s anointed, the chosen king of Israel in the prime of his life, who was head and shoulders taller than everyone else. He should have been the one to face Goliath. If he would have stepped out, God would have backed him up and King Saul would have defeated Goliath.

Instead a teenager named David, who was not dismayed, stepped out and killed the giant. It was David who slung the rock, but it was the Holy Spirit that guided it straight into Goliath’s big head. David could not have killed Goliath without God, but God needed a man like David who would step out there and start slinging some rocks. In the same way, today we work together with the Holy Spirit to accomplish the will of God on the Earth. God doesn’t do it alone, He chooses to use people.

Fear will cause you to do stupid things and it will paralyze you. The Apostle Peter denied knowing Jesus three times because he was afraid of what might happen to him. Saul and the Israelite army cowered in fear while their enemy taunted them.

We are in a spiritual war on the Earth, and in a war you don’t get to win every battle. You may win some and you may lose some. In a boxing ring, you may get knocked down but you get back up. We fail, we fall, we get disappointed, but we get back up and take another swing. One thing is certain, your fight is over when you stop getting up from the mat.

Don’t let your past hurts, your disappointments, your failures, cause you to become dismayed and paralyzed so that God can no longer use you. Our God is able, and if He brings you to it, then He will bring you through it. Nothing catches Him by surprise for He can see the end from the beginning. Pray. Listen. Trust Him. Do not be dismayed.

Prayer: Heavenly Father, please fill me with Your Holy Spirit and let me see the world through Your eyes. Give me boldness, wisdom, and the strength to stand for You, in the name of Jesus Christ I pray. Amen.