Today I am going to be talking about: “Cycles and Seasons”. For everything under heaven, there is a season, and those come in cycles that God has established long ago. For example: Summer always follows spring, and that always comes after winter.

As I began to look into this, I have discovered that this is a deep subject, so this will begin a series that I will touch on from time to time over the next few months. This message will be an introduction, or overview. 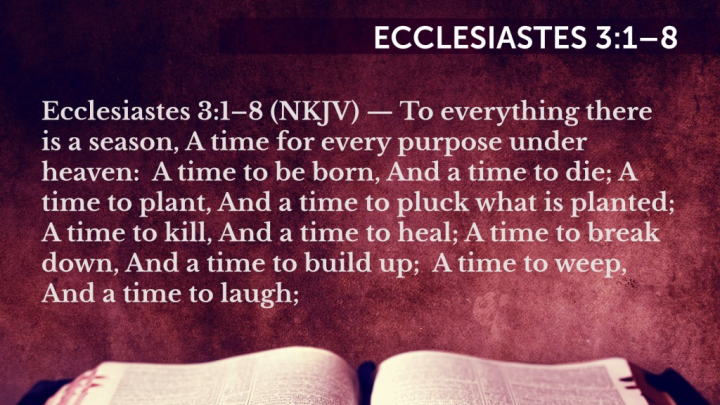 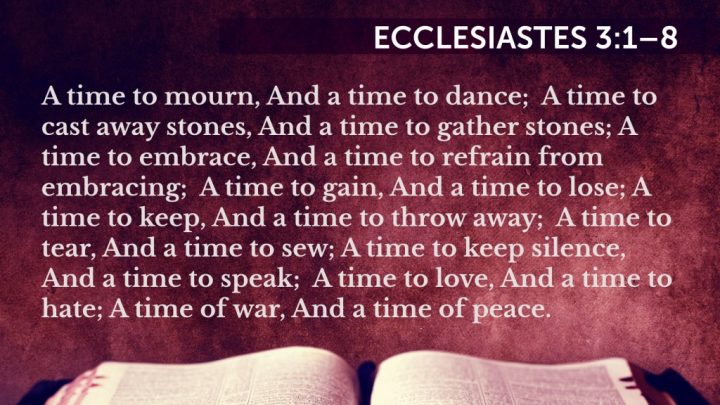 Seasons, they come and they go. There is a time to weep, but it is followed by a time to laugh. There is a time to mourn, but it is followed by a time to dance. God has set everything in seasons. It is important to know this. Job went through a test “for a season” but it passed and then he came out the other side better off than before. God may take you through a desert place, but you will not die there. You will come out the other side. Don’t give up hope because you are in the winter and everything that you have tried to plant is dead and nothing seems to work, or grow, or prosper. This too shall pass.

God intended there to be cycles and seasons from the very beginning: 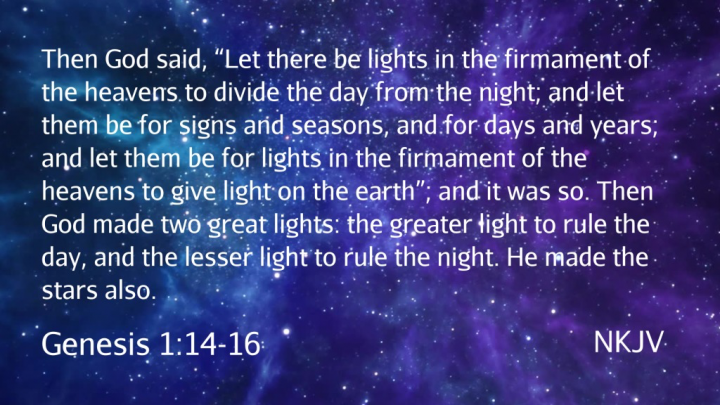 When someone speaks about the signs of the stars, many begin to think of astrology and horoscopes, but God was the One that invented the stars and set them in place. We should not let perversions ruin something that God intended for good. To be clear, astrology and horoscopes are a false religion related to the occult and black magic. They mean nothing to me, and I believe that those that follow Jesus should stay clear of those practices, but we can observe the stars that our Heavenly Father created. Lets look at some patterns that God has set in place: 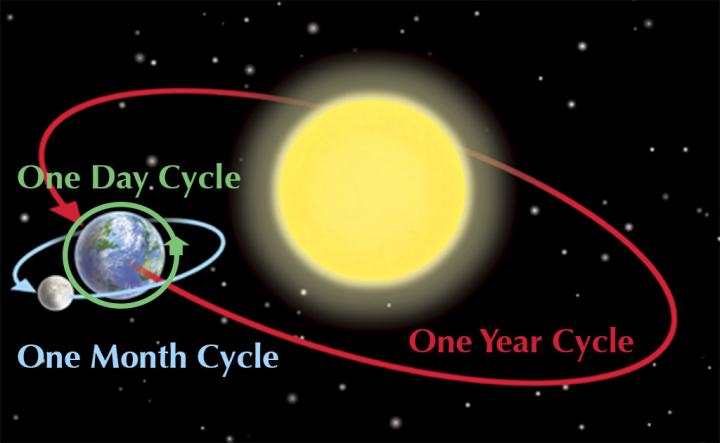 * Our days are measured by one full rotation of the earth on its axis. The Earth performs a complete spin in about 24 hours. In the Bible, a new day begins in the evening.

* Our weeks are a span of 7 days. God worked 6 days and He rested on the 7th. Genesis 2:3 (NKJV) —  Then God blessed the seventh day and sanctified it, because in it He rested from all His work which God had created and made. We will come back to this in detail.

* Our months are measured by the time that it takes the moon to circle the earth, which is about 29.5 days. The beginning of our month coincides with a new moon appearing.

* Our years are measured by the time that it takes the earth to travel around the sun once, which takes about 365 days.

These times are not by accident, but carefully calculated and each has a purpose. The earth is not drifting through space aimlessly, but on a set course. I am laying a foundation of the things that I will referring to during this series. God has established the times and seasons and it is important that we stay in tune with Him. Many events have been changed in today's church. They are no longer what there were, or “when” they were intended to be. I want to dig into God’s word and uncover the original meaning of some of them. What if we could be in sync with God’s cycles and seasons that He established long ago, and why is this important: 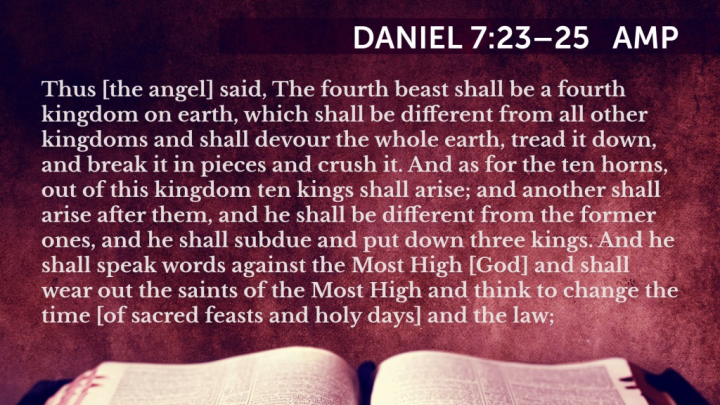 Daniel 7:23–25 (AMP) — "Thus [the angel] said, The fourth beast shall be a fourth kingdom on earth, which shall be different from all other kingdoms and shall devour the whole earth, tread it down, and break it in pieces and crush it. And as for the ten horns, out of this kingdom ten kings shall arise; and another shall arise after them, and he shall be different from the former ones, and he shall subdue and put down three kings. And he shall speak words against the Most High [God] and shall wear out the saints of the Most High and think to change the time [of sacred feasts and holy days] and the law;"

Now if you followed my series on “What Time is it?” then you know who the 4th beast is. In that series we covered how the Romans had merged paganism and Christianity into an acceptable religion in order to unite their kingdom. For example: God’s feast of Passover was outlawed by Emperor Constantine and replaced with what we call Easter, which was a pagan holiday and traces back to the goddess ishtar. Thousands of people were put to death over this. The Sabbath day, which fell on Saturday, was moved to Sunday. The names of the days of our week, and the names of our months mostly came from pagan Roman gods: 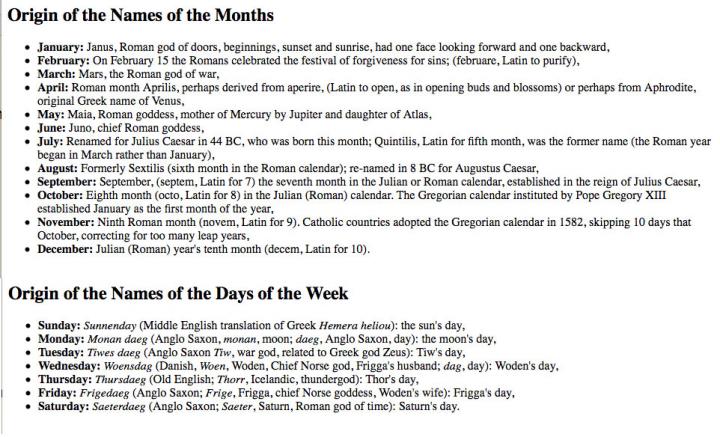 So much paganism crept into the church during the dark ages, that I don’t know how that it could be fixed. I am not trying to be an extremist, I just want you to be aware of what has actually happened. In our life, we are going to begin to correct some of this error as the Lord reveals it to us, to try and get in sync with God’s times, festivals, and feasts once again.

In the past, we have covered that Jesus was our Passover Lamb, and that satan tries to cover that fact up every way that he can, because the blood of Jesus is where the delivering power comes from. I am just going to say it outright and plain:

All of the feasts and special days that God ordained in the Bible have been swept away by the church and replaced with pagan festivals, on a different day.

For example: This Wednesday is the original Jewish day of Pentecost for 2017. When the disciples were all gathered together in the upper room and the Holy Spirit fell on them in power. We will be having a praise and worship service on that afternoon here at RHM.

There is a lot to say about this subject and I want to cover the importance of the Sabbath day, the four main feasts of the Bible, when they are and how they were observed. I want us to get back to the roots and truth that Jesus and the disciples lived, but in a graceful way, not legalistic. This is not about observing rules, but about meeting with God.

Many believe that the feasts of God were done away with, but the last supper that Jesus ate with the disciples was a Passover meal. Then the Holy Spirit fell on the disciples in the upper room on the day of Pentecost. Coincidence? I doubt it. What if they had not been there on that day? God could have sent the Holy Spirit down anytime that He wanted, but He chose the day of the Pentecost feast to do so, and all those who were present were filled with the Holy Spirit.

Do you know that keeping God’s Sabbath, which boils down to resting for a 24 hour span of time once a week, is listed in the ten commandments? God views working 7 days a week just as bad as committing adultery, stealing, and murder. Hard to believe, but those are the facts, and I did it for years.

The Sabbath day in scripture is from sundown on Friday until sundown on Saturday. As in Genesis, the evening and morning were the first day. Beginning next Saturday evening at 4PM EST, we are planning to have a praise and worship service, on the evening of God’s Sabbath. Sylvia and I currently take off Sunday afternoon through Monday afternoon as our Sabbath day because we work the other 6 days of the week, but we do set 24 hours of rest aside and force ourselves to stop.