Acts of Kindness from Refreshing Hope Ministries on Vimeo.

When you do what the Lord asks you with the right attitude, it brings a reward. God is really good with numbers, and He always pays His debts. Now we don't earn our salvation, for we are saved by grace alone, and it is a free gift if we choose to accept it (Ephesians 2:8). Not everyone does. What I mean is, there is a pattern in scripture that when someone does something for God, He does something for them in return. Consider Jesus by the Sea of Galilee: 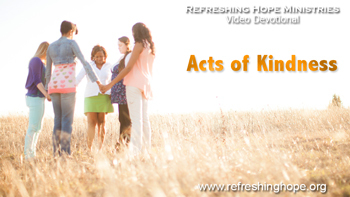 (Luke 5:1–6 NASB)  Now it happened that while the crowd was pressing around Him and listening to the word of God, He was standing by the lake of Gennesaret; and He saw two boats lying at the edge of the lake; but the fishermen had gotten out of them and were washing their nets. And He got into one of the boats, which was Simon’s, and asked him to put out a little way from the land. And He sat down and began teaching the people from the boat. When He had finished speaking, He said to Simon, “Put out into the deep water and let down your nets for a catch.” Simon answered and said, “Master, we worked hard all night and caught nothing, but I will do as You say and let down the nets.” When they had done this, they enclosed a great quantity of fish, and their nets began to break.

As Jesus was teaching by the seashore, the crowd grew large and was pressing against Him to hear better. Peter's fishing boat was there, so Peter pushed it out in the water and let Jesus use it as a speaking platform. When Jesus was done teaching, He told Peter to go into the deep water and let down his net for a catch.

Now, Peter was a professional fisherman who had fished all night and caught nothing. And here was a Carpenter giving him instructions on fishing. Yet, Peter was humble enough to ignore that, and he basically said, "Yes, Master." When they let down the net, they caught so many fish the net began to break, and the boat began to sink. They had to call for others to help them bring in the catch.

There is an interesting story in 2 Kings about a Shunammite woman. She fixed a room in their house for the prophet Elisha to have a place to rest when he traveled through their area.

(2 Kings 4:8–10 NASB)  Now there came a day when Elisha passed over to Shunem, where there was a prominent woman, and she persuaded him to eat food. And so it was, as often as he passed by, he turned in there to eat food. She said to her husband, “Behold now, I perceive that this is a holy man of God passing by us continually. “Please, let us make a little walled upper chamber and let us set a bed for him there, and a table and a chair and a lampstand; and it shall be, when he comes to us, that he can turn in there.”

That simple act of kindness for Elisha touched her life several times. She was married, but they had no children. Elisha told her within one year, you will be embracing a son. It came to pass. She had a son the following year.

Some years passed by, and her son grew to be a young man. One day he was out in the field with his dad when he suddenly had a sharp pain in his head and died soon after. The woman went and told Elisha, and soon her son was resurrected from the dead.

In 2 Kings chapter 8, there was a famine in the land for seven years. Elisha told the Shunammite woman before it began to take her family and leave the area. So she avoided starvation and stayed in the land of the Philistines until it was over. Apparently, someone else took over her house and field while they were away. She went to petition King Jehoram to give her property back, and the servant of Elisha just happened to be there speaking with the King about her:

She received all that she asked the King for and more, even the produce from the field for the last seven years while she was away. It was not a coincidence that Gehazi was speaking to the King about her when she walked into the room to plead her case. The Lord was still rewarding her act of kindness toward His prophet years later. It was indeed a gift that kept on giving.

The Lord promises to reward us, but we tend to spiritualize everything and put it into the millennium. "Our reward will be in heaven." Yes, of course, it will. But there are also rewards in the here and now for those who are willing to do something for the Lord. Consider these scriptures:

(Hebrews 11:6 NASB)  And without faith it is impossible to please Him, for he who comes to God must believe that He is and that He is a rewarder of those who seek Him.

(Matthew 10:42 NKJV)  And whoever gives one of these little ones only a cup of cold water in the name of a disciple, assuredly, I say to you, he shall by no means lose his reward.”

(Matthew 6:1–4 NASB)  “Beware of practicing your righteousness before men to be noticed by them; otherwise you have no reward with your Father who is in heaven. “So when you give to the poor, do not sound a trumpet before you, as the hypocrites do in the synagogues and in the streets, so that they may be honored by men. Truly I say to you, they have their reward in full. “But when you give to the poor, do not let your left hand know what your right hand is doing, so that your giving will be in secret; and your Father who sees what is done in secret will reward you.

(Matthew 6:5–6 NASB)  “When you pray, you are not to be like the hypocrites; for they love to stand and pray in the synagogues and on the street corners so that they may be seen by men. Truly I say to you, they have their reward in full. “But you, when you pray, go into your inner room, close your door and pray to your Father who is in secret, and your Father who sees what is done in secret will reward you.

God rewards people for what they do, whether that is good or bad. Some of the last words in the Bible are these:

(Revelation 22:12 NASB)  “Behold, I am coming quickly, and My reward is with Me, to render to every man according to what he has done.

Do good to people. If you can, help someone. Give something away to someone who needs it. Make the world a better place to live. The Lord sees all, and He will reward you for what you have done.

Prayer: Heavenly Father, I pray that You let me see others through Your eyes. Give me a clear vision of how I can help make the world a better place. Change my heart, oh God. Help me get in tune with what You are doing. In the name of Jesus Christ, I pray. Amen!